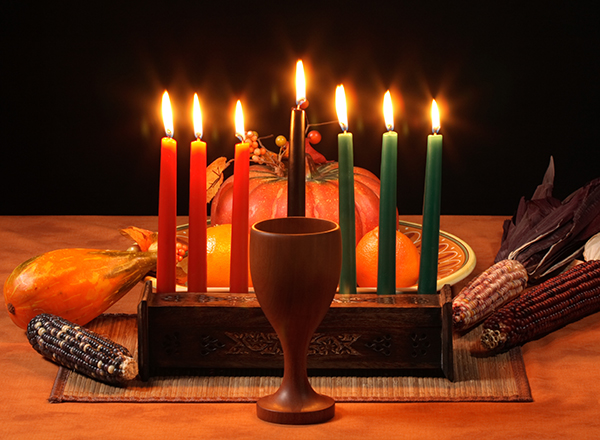 Starting Thursday, Dec. 26, and concluding Jan. 1, millions of individuals and families worldwide will celebrate the holiday of Kwanzaa. A campus celebration was held at HFC on December 4.

What is Kwanzaa, and how did it begin?

Kwanzaa is a holiday that celebrates family, community, and culture. The holiday was created by Dr. Maulana Karenga in 1966. Dr. Karenga is professor and chair of Africana Studies at California State University, Long Beach, executive director of the Kawaida Institute of Pan-African Studies, Los Angeles, and chairman of The Organization Us.

The word Kwanzaa, and many of the terms you will see in this message, are Swahili words. Swahili is an African language that is widely spoken in Eastern and Southeastern African nations.

Dr. Karenga was a doctoral student in the mid-1960s. He concluded that Black people in the United States did not have holidays that recognized their cultures, histories, and traditions. (Black History Month was not recognized nationally until 1976.) He believed that a national holiday would be a positive step toward multicultural understanding, and would also give Blacks in the United States and others a deeper connection to their heritage, cultures, and traditions.

In 1966, Dr. Karenga combined the celebrations of several different traditions, such as practices of the Ashanti and Zulu peoples, to establish Kwanzaa. The holiday began to spread, and is now celebrated by millions of people in the U.S. and worldwide.

Kwanzaa means “first fruits.” The holiday focuses on what it means to be African and human in the fullest sense. Dr. Karenga created the holiday to engage the world in understanding certain Afrocentric cultural traditions, the dignity of every person, the centrality of family and community, and the integrity of the environment and humans’ kinship with it. Kwanzaa is a community-oriented celebration that focuses on all aspects of the family, including those who are present and those in the ancestral realm. No one is left out.

The seven days of Kwanzaa are a time of celebration, meditation, and recommitment. They focus on the Nguzo Saba, or Seven Principles (see below). On each of the seven nights, the family gathers near a table containing seven Kwanzaa symbols. A child lights one of the candles on the Kinara, or candelabra. On the first day, the black candle in the center is lit, followed by alternating the red (left side) and green (right side) candles. After lighting a candle, the family discusses one of the Nguzo Saba principles. Individuals are encouraged to reflect on the principles throughout the holiday and embrace them in their own lives. An African feast, called a Karamu, is traditionally held on December 31.

The Nguzo Saba are central to the celebration of Kwanzaa and to the African-centered values that embrace the importance of celebrating one’s own culture through meaningful, constant remembrance and connections to the ancestors. The Nguzo Saba emerge from Kawaida philosophy, which evaluates the best of African thought and practice. Each principle represents a different day of the celebration:

Kwanzaa also has seven symbols presented on a family’s area of gathering or common table:

Other expressions of Kwanzaa

The holiday is secular, not religious, which makes it inclusive. Celebrations often include songs and dances, drums, storytelling, and readings. The holiday is rich with symbolism, and colorful art displays and clothing are encouraged.

To all who celebrate Kwanzaa, I hope you enjoy each of the seven days, surrounded by people you love. I wish you peace, unity, and joy during this time and in the coming year.