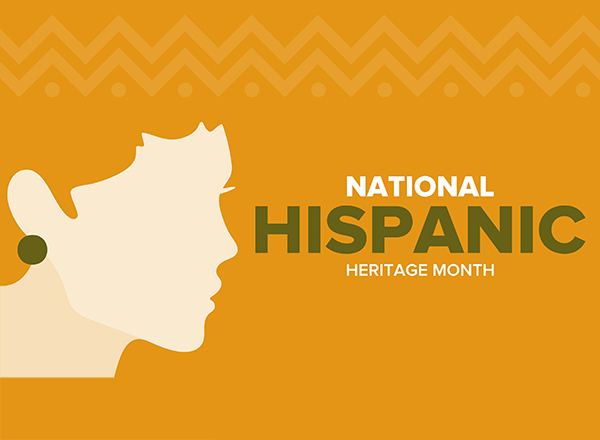 From September 15 through October 15, we will celebrate National Hispanic Heritage Month.

What is National Hispanic Heritage Month?

This month is a celebration of the heritage, histories, cultures, and contributions of Americans, immigrants, and visitors whose ancestors came from parts of Spain, Mexico, the Caribbean, Central America, and South America, which includes me, as my father was born in Brazil.

National Hispanic Heritage Month began in 1968 under President Lyndon Johnson. It was expanded in 1988 by President Ronald Reagan to cover a full month.

Brief history of Hispanic heritage in the U.S.

September 15 was chosen to begin the month because it is the anniversary of independence for the nations of Costa Rica, El Salvador, Guatemala, Honduras, and Nicaragua. Mexico (Sept. 16) and Chile (Sept. 18) celebrate their independence days near the same time. Also, Indigenous People’s Day or Columbus Day – sometimes called Día de la Raza in Latin American countries – takes place during the same month.

Latin American history includes a long period of conquest and colonization that has significant importance. As with U.S. history, indigenous peoples were not treated with respect and dignity as the colonists took over their lands to establish new territories for their mother countries.

The large Hispanic and Latino presence in the U.S. today began before the 1846-1848 Mexican-American War. Texas had declared independence from Mexico in 1836. The U.S. annexed Mexico as a territory in 1845, making it a U.S. state in 1846.

The war concluded after U.S. forces captured Mexico City and forced Mexico to sign the Treaty of Guadalupe Hidalgo on February 2, 1848. In exchange for a total of $18.25 million (about $600 million today), Mexico ceded to the U.S. an immense territory of nearly 1 million square miles, including land in what is now California, Nevada, Utah, New Mexico, Arizona, Colorado, Wyoming, Oklahoma, and Kansas. Residents of these lands were granted U.S. citizenship, and the Rio Grande river became the acknowledged border between the U.S. and Mexico.

Citizens and visitors from every country in Central and South America have come to the United States in the 170 years since. They have brought with them a broad array of cultural, ethnic, artistic, intellectual, racial, linguistic, religious, and individual diversity, which continues to enrich our nation. While Latinos live everywhere in the U.S., some communities and areas are predominantly Hispanic today, including sections of Texas, California, Florida, and other locations. The majority of citizens in the U.S. territory of Puerto Rico are of Hispanic heritage.

How are the terms Hispanic and Latino (or Latina) different?

These two terms for ethnic identity are often used interchangeably. The difference is that Hispanic refers to people of Spanish-speaking origin or ancestry, while Latino refers to people whose ancestry is Latin America (the countries comprising Central and South America, plus Mexico and some Caribbean nations). If you don’t know someone’s origin and are not able to ask them, it is OK to refer to them as either Hispanic or Latino/a.

Because Spanish-language terms that end in “o” or “a” have gender-based meanings, you may see women referred to as “Latina” rather than “Latino.” The term “Latinx” has also been used in some cases to remove the gender identification from the term, though this is unofficial and is used less frequently.

People of both Hispanic and Latino heritage can be from any race.

Unless someone is from Spain, they should not be referred to as “Spanish.” Spanish is a language and a culture that many people share, but only citizens of Spain may be called Spanish as a nationality.

Many communities and organizations host festivals, art shows, concerts, conferences, parades, community gatherings, and many other celebrations of Hispanic heritage. I encourage you to find events and activities that will help you learn more about these rich traditions.