Notice: This article is more than one year old and is part of the Henry Ford College news archive. Information in the article may be outdated. For the most current news and information about Henry Ford College, please visit hfcc.edu/news, or contact communications@hfcc.edu.
Release Date:
Monday, August 19, 2019

Siblings in HFC’s Cisco program work together at Secure-24 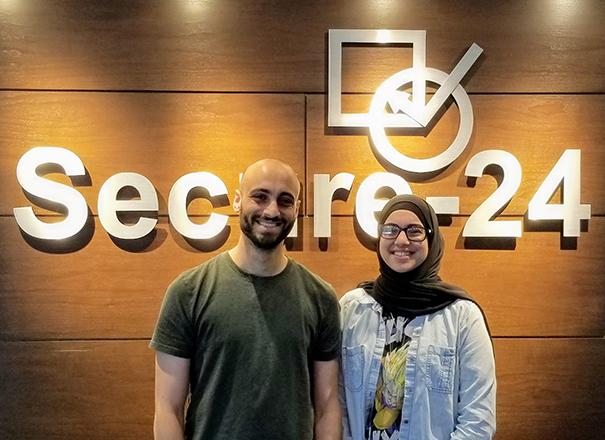 Mohamad Mroue (left) and his younger sister Zainab (right) are students in HFC's Cisco Program. They also work at Secure-24.

Don’t say that Zainab Mroue followed in her big brother Mohamad’s footsteps. In fact, she says, it was quite the opposite. “He followed in mine!” said Zainab with a laugh. The 2019 Fordson High School alumna earned her Computer Networking Academy – CCNA Certificate of Achievement from HFC in May 2019.

On April 16, Zainab won a $250 scholarship from the KLA Endowment Scholarship Fund, sponsored by KLA Laboratories, Inc. in Dearborn. This will apply toward her tuition this fall when she continues her education at HFC. She plans to earn her associate degree in network administration and transfer to Eastern Michigan University in Ypsilanti, where she’ll work toward a bachelor's degree in network engineering.

Zainab's original plan was to enter the medical field as either an optometrist or a nurse. She took several science courses, along with some IT courses. She didn’t enjoy the science courses as much as she did the IT courses, so she altered her path to focus on IT.

Currently, Zainab is a full-time IOC Technical Representative at Secure-24, Inc., an IT services firm in Southfield. She began this job at the beginning of June and works mainly on an account for a Japanese multinational company that manufactures personal care products.

“It’s a great job," said Zainab. "The team I’m on is very supportive. The managers and supervisors are very helpful and friendly. It’s a comfortable environment.”

Zainab sees many career options in her field.

“It’s a never-ending field where you can take the smallest thing and expand it into anything you want,” she said. “The fact that’s it’s mostly a male-dominated field, I take it as a challenge to excel.”

Mohamad also works at Secure-24 as a Technical Support Representative. He started nearly a month before his sister, though she was hired first.

“It’s really cool to see her in this profession,” said Mohamad.

After graduating from Fordson in 2007, he attended the International Academy of Design Technology in Troy, where he studied graphic design. After several years in the graphic design field, Mohamad realized it wasn’t a good fit for him. His heart was in IT. So he returned to school in 2015 at HFC. He plans to earn his associate degree in network administration from HFC in 2020. From there, he plans to transfer to EMU and study network engineering.

“I made the mistake of not going to HFC after high school," he said. "HFC gave me a second chance to be in the industry I really wanted to be in.”

Master of your own destiny

Mohamad worked at KLA in Dearborn for two years before joining Secure-24.

“There’s a lot I really like about this job. It has plenty of variability. You never know what will happen when a ticket comes in. No two days are ever alike. I’m never bored. The culture’s very nice here at Secure-24," he said. "Their philosophy is ‘Work may be tedious, but we won’t make it tedious; we’ll make it as enjoyable as possible.’ And they do. I enjoy getting up every morning and coming to work.”

Both Mroue siblings agreed that the best part of their jobs is being in charge of their future.

“When you start at Secure-24, they give you a set of 14 objectives that will help you in your job and look good on your résumé. Once you finish the 14 objectives, you get a $5,000 raise and a promotion,” said Mohamad. “Your future is very much in your hands. There’s no uncertainly or randomness or favoritism involved. I really, really like that idea. They know that happy employees work harder.”