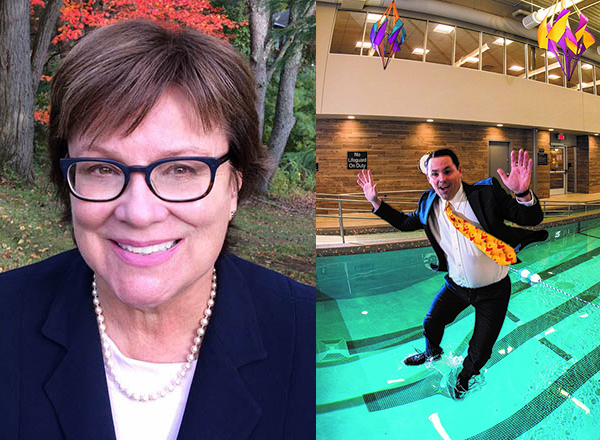 Margaret Kelly, left, was the creative mind behind CRC president/CEO Steve Fetyko's fully-clothed dive into a pool (right). She now teaches HFC students how to succeed in graphic design.

“I am humbled by this award, because it comes from peers and, in many cases, competitors who recognize the quality and passion of the work. The greatest honor is the business results and successes this effort delivers for the client,” said Kelly.

To set a vibrant, lively tone for Heart & Soul, the lead story featured striking photos of CRC president/CEO Steve Fetyko jumping in the swimming pool, dressed in a suit and tie.

“He was a good sport about it, showing he doesn’t take himself too seriously, and was willing to take the plunge. He and his colleagues found my approach exciting,” said Kelly. “We wanted to fight aging stereotypes and promote active senior lifestyles with Heart & Soul. This magazine portrays that aging is just another step in life. And this step can be wonderful.”

Her work on Wayne State Magazine was also recognized by the International Association of Business Communicators and the Society of Professional Journalists.

Her list of awards doesn’t end there. She won an SPJ Award for Best Cover in 2016 for Wastewatcher Magazine, a City of Ann Arbor publication.

“The values of SPJ are important to me,” said Kelly. “I’m honored to be recognized by them. It demonstrates my work has passed certain benchmarks and that I’m able to deliver content that is creative and effective. I am thankful to share these experiences and skills with my students.”

“I love the diversity here at HFC”

Kelly’s late father, Robert, who served in the armed forces during World War II and fought in the Battle of the Bulge, was an artist. He taught art and inspired Kelly to become an artist herself.

A graduate of Dominican High School in Detroit, Kelly went on to earn her Bachelor of Fine Arts in drawing and painting from Wayne State. She did post-graduate work at Wayne State and the College for Creative Studies in Detroit. She also completed coursework at the University of Michigan in Ann Arbor.

Before founding Mgk with her husband, Stephen Lee, in 2005, Kelly was vice president at Campbell Ewald, a well-known Detroit-based advertising agency. She later taught at Specs Howard School of Media Arts in Southfield for eight years. She’s taught at HFC for three years, as well as participated in workshops in New York City and Denmark.

“I love the diversity here at HFC and in Dearborn,” she said. “I love my students, too; they’re hard-working and motivated. HFC gives its students a solid foundation in drawing.”

"Margaret is a tireless educator of design. Under her guidance students learn the importance of branding and fundamentals,” said Victoria Shepherd, HFC lead instructor, digital and graphic arts. “Margaret brings out the creativity of the students by encouraging the students’ best skills. I have had the opportunity of working for Margaret in her role as art director. In this capacity, her experience was invaluable in achieving the best solution. Margaret remains a source of inspiration and expertise.”