Notice: This article is more than one year old and is part of the Henry Ford College news archive. Information in the article may be outdated. For the most current news and information about Henry Ford College, please visit hfcc.edu/news, or contact communications@hfcc.edu.
Release Date:
Thursday, February 7, 2019

John Dingell, a man For the Good of All 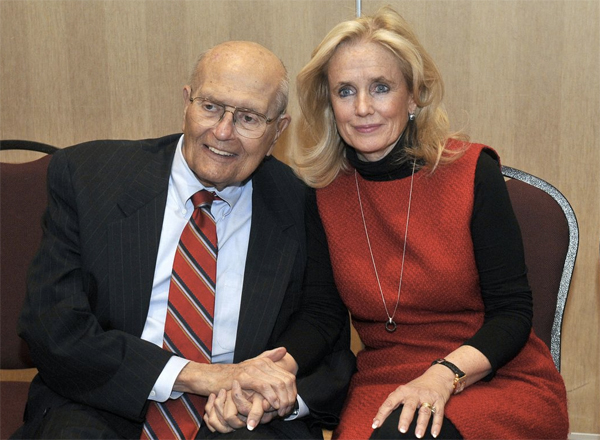 Former U.S. Congressman John Dingell was an extraordinary friend to our state, our region, our community, and to all of us at Henry Ford College. Like so many of you, I was deeply saddened to learn of John’s passing on February 7. I offer heartfelt condolences from all of us to John’s wife and our good friend, Congresswoman Debbie Dingell, and to the extended Dingell family.

John’s career of public service was remarkable. He joined the U.S. House of Representatives in 1955, representing Michigan’s 16th district and succeeding his father, John Dingell Sr., who held the seat for 22 years. John served for nearly 60 years, until 2015, becoming the longest-serving congressperson in U.S. history.

John was also the longest-serving Dean of the U.S. House of Representatives and one of the final two World War II veterans to have served in Congress. He was a long-time member of the House Energy and Commerce Committee, serving as its Chairman for many years. In 2014, President Barack Obama awarded John the Presidential Medal of Freedom.

Read remembrances by the HFC community and friends about John Dingell

As impressive as his list of national accomplishments is, John Dingell and Debbie have been devoted community members. Their home is here in Dearborn, and both have been as active on the local scene as the national scene.

John was a man driven by his purpose--making others’ lives better. He did some of that work right here at the College. Just a few examples:

In recent days, my office reached out to people who had known and worked with John Dingell. We received so many wonderful notes about John, and I want to share a few of them with you.

Michigan Governor Gretchen Whitmer: “Today the great state of Michigan said farewell to one of our greatest leaders. John Dingell will forever be remembered as the Dean of Congress, not simply for the length of his service, but for his unparalleled record of legislative accomplishments.”

Michigan Secretary of State Jocelyn Benson: “Congressman Dingell’s leadership, wisdom, and wit will be missed, but his legacy will live on through every person he inspired to lead and serve. Michigan has lost a legend who was both a strong, determined, effective legislator and a kind, gentle public servant dedicated to his constituents. I am grateful for the example he set and for being our fierce champion.”

Dearborn City Councilwoman and HFC alumna Leslie Herrick: “The epitome of diplomatic, a witty and charismatic speaker, John Dingell was a fierce advocate. Much of what we see today was molded by his actions in matters like Medicare and civil rights. When deciding how to address certain situations in my own career, I’ve thought, ‘What would John Dingell do?’ In recent months my son and I enjoyed his sharp observations and wit through his Twitter posts. We have his family in our thoughts, hoping they are comforted with the knowledge that the dean of the Congress made a positive impact on countless lives.”

Former HFC President Andy Mazzara: “John Dingell helped us at HFC, and he made a difference for all colleges and students with his advocacy for more federal financial aid and job training funds.”

HFC political science professor, Dr. Anthony Perry: “John Dingell was a great friend to the College, our students, and the community. He was always there to speak to students and attend our Democracy Institute events that aimed to engage our students in public service. When we pitched the first student convention at HFC, Dr. Mazzara and I went to see John. He was the first person we approached to be on the honorary steering committee. He gave his full support, and was always there for us and our students.”

There was never any doubt John would lend a friendly listening ear at any time. He was a dedicated supporter of our College motto in his own life: For the Good of All. I encourage all of you to learn more about this historical leader. You will see a life of getting things done for people through collaboration, communication, and compromise. He showed us that true leaders work across disagreements to make progress for all, rather than just seeking to win political victories.

We will miss John Dingell deeply. I cannot overstate our gratitude to him for leading the way, and for lighting the way for the leaders who would follow. Our nation, our state, our community, and our College are immeasurably better for having known John. What a privilege it was to have this great man in our midst. I hope all of us will find something in John’s life that can serve as an inspiration for our own lives, For the Good of All.