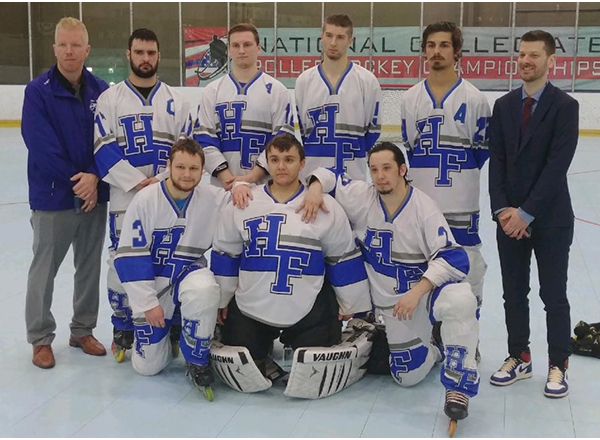 “We had a really good run. We made it to the championship game and lost to STLCC,” said Rick Fenwick, HFC roller hockey coach who also served as an adjunct psychology professor at the College.

An impressive record in a short time

The club is in its second season. Fenwick, who played hockey for 20 years, coached both seasons. This is his first time out coaching a team at the college level.

Coming together in a “cool way”

“The team came together in a cool way,” said Fenwick. “I talk about my hockey days in my classes, applying it to my psychology background. One of my students was Dominic. He approached me, telling me he wanted to put a hockey team together and needed a coach. I thought about it for a few weeks and met with HFC Athletic Director Rochelle Taylor. She interviewed me for the coaching position and hired me – that’s how it all happened. Pretty crazy, isn’t it? It was just good fortune.”