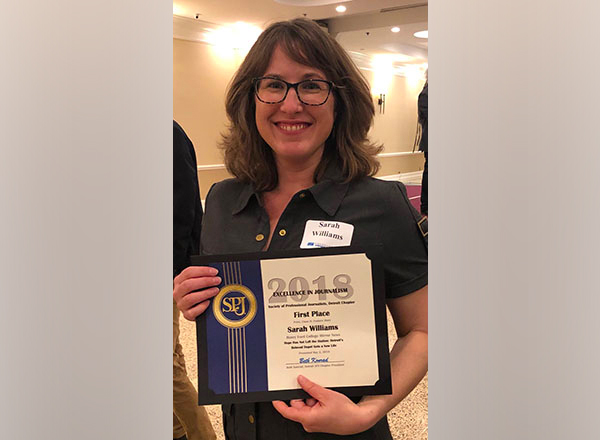 “Many Excellence in Journalism awards were granted, and it was nice that I was in a community with many journalists from the Detroit area,” said Williams, of Redford, who attended HFC from 2016-18.

Currently, she is an intern for Hour Detroit Magazine in Troy.

“At Hour, I write articles for the website that involve interviews and research. I fact-check and transcribe my editors’ interviews and update event and business listings. I attend production and pitch meetings, where I pitch ideas for web and print,” said Williams. “I am working with my web editor now to choose a long-term project. This will be a long-form feature piece that I will complete by my internship’s end in mid-August. As much of what I write for Hour is light and fast, I am looking forward to working on something meatier and on something I am passionate about, possibly in community education or health care.”

The confidence to set aside fear

Williams attended Troy High School but did not complete her senior year. She got married at 18 and started a family, and she now has three children.

Williams earned her GED, and came to HFC when her youngest daughter began high school at the Henry Ford Academy (HFA) in Dearborn in 2016.

“My kids were growing up, my life was changing, and I was ready to seek out what I had set aside in order to raise a family and do some growing up of my own,” she said.

It was convenient for Williams to take classes at the College, which was near her home. She called HFC a nurturing place.

“I am a non-traditional student, and the community, atmosphere, and experiences I had at HFC gave me confidence to set aside my fear of not fitting into the general student population and to explore areas of curiosity – art, music, writing – to cultivate and identify a career path I could pursue with passion,” explained Williams. “HFC was a nest, providing just the right-size campus for a new college student to feel comfortable, even in more seasoned years. The College's encouraging staff helped me recognize ways that my life experiences and non-academic education have prepared me to be a self-motivated student as well as an interesting writer with an independent voice and perspective.”

A shared humanity amidst diverse experiences

It was HFC that sparked her interest in journalism. She took her first journalism class taught by Dr. Peter Kim.

“I became excited about the relationship between journalists and their communities,” said Williams. “The trust that must be nurtured and the responsibility journalists have to hold those in power accountable to their communities. I also saw the importance of having journalistic voices raise a community’s conversation, highlight its solution-based work, and challenge themselves and their own worldview, as well as the readers’, with diverse representation.”

Williams decided to major in journalism rather than English for two reasons: the people she met, and the benefit of her own ongoing education.

“With every feature story I write, I learn. About places and organizations, yes, but mostly about our shared humanity amidst very diverse experiences,” explained Williams “I grew up reading fiction in both hands, morning, noon, and night. If the writing was strong, I could become someone else with every turn of the page. I could feel what my characters felt by reading their stories. My hope is to use creative journalistic writing to transport readers into the hearts and minds of real people, to build understanding, compassion, and empathy toward those whose paths we usually don’t cross. To help us, in some small way, experience one another’s challenges, and learn of the ways that communities are recognizing and addressing collective needs and celebrating accomplishments.”

Meeting people and telling their stories has been the best part of being a journalist.

“I have the privilege of continuously meeting new people and learning from them. A few months ago, I spent several hours with a man who bravely shared with me his nearly 50-year-struggle with drug addiction. It was heartbreaking and very personal,” recalled Williams. “What right did I, a stranger, have to hear his story? Yet, the joy on his face and the tears in both our eyes as we talked over the hope he’s found through 14 victorious and hard-working months in recovery – this is why he wanted me to know. He wanted to tell others it was possible, that there are organizations and support out there that can help you change your life. He knew this was more than just one man’s story. It was a cultural account; it was a story being lived, to some degree, by the masses.”

“I loved it at HFC. The student body was diverse, the teachers invested in their students, the honors classes were thought-provoking and challenging,” she recalled.

Williams also had an invaluable experience working at The Mirror News, which was essential to her education and growth as a journalist. She enjoyed the newsroom atmosphere and appreciated the guidance of Kim, who served as advisor and encouraged journalistic curiosity, brave voices, and producing a high-quality publication.

“I worked with students who were passionate about publishing a wide range of topics, including important national and statewide news stories told through a local lens in regard to how they affected HFC students,” said Williams. “The Mirror News didn’t shy away from challenging campus administration and practices. In addition to campus stories, it also strongly covered what was happening in Dearborn, Detroit, and Michigan as a whole. I thought The Mirror News kept students informed on a diverse scope.”

She continued: “As creative editor, I was able to have a good amount of input into the paper’s pages of arts and culture, which we called ‘Kaleidoscope.’ As I learned more about writing, editing, and layout, I also had opportunities to nurture new writers, generate story ideas, and take my own photographs. Photojournalism interests me, and I have been able to continue learning that skill through classes and projects at Wayne State.”

Other great memories from HFC include taking art classes with Steve Glazer and joining the chorus under the direction of the “hilarious” G. Kevin Dewey. She attended and submitted work to two Liberal Arts Network for Development (LAND) Conferences in Muskegon.

“The two classes that captivated me above all others were the Honors Detroit Colloquium with Dr. Kim and Great Works with the infuriating, yet thought-provoking, Dr. Ryan Showler,” said Williams.

“When I first had the pleasure of meeting Sarah in my Introduction to Journalism course, I had the immediate sense of how remarkable she is,” said Kim. “Sarah is an amazing talent in so many areas. I was very fortunate to have her as a student, to have advised her as the creative editor of The Mirror News, and to witness her ongoing success. Sarah continues to help students at HFC. She was pivotal in providing background on the journalism program at Wayne State that will help lead to an articulation (transfer) agreement between our two programs.”