Notice: This article is more than one year old and is part of the Henry Ford College news archive. Information in the article may be outdated. For the most current news and information about Henry Ford College, please visit hfcc.edu/news, or contact communications@hfcc.edu.
Release Date:
Thursday, May 23, 2019 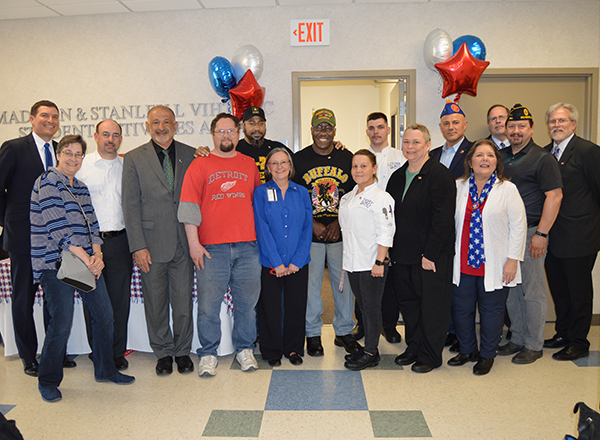 On May 23, just before the national Memorial Day holiday, the College officially opened its new Veterans Center in Room 111 of the Student Activities Area of the Student and Culinary Arts Center (Building M on the main campus).

“This center is a casual place for student veterans, currently military members, and their dependents to come in and connect with each other – that’s our main goal. We have tried to do many events where student veterans can meet each other, and it doesn’t always work out with their schedules. With this new center, they can come in when it’s convenient for them on their own terms. They have a connection to their fellow veterans that the rest of us don’t have,” said HFC Veterans Coordinator Gail Bock.

Approximately 30 people – several of whom are veterans from the community, eight of whom are veterans attending HFC – were present for the dedication. The center was inaugurated with a ribbon cutting, balloons, and a beautiful cake with red, white, and blue frosting. HFC's campus radio station, WHFR FM, played patriotic music during the dedication.

A great place for veterans

Henry Ford College has long been a college that welcomes veterans and active-duty military personnel. The College has earned distinctions as a veteran-friendly employer and gold-level veteran-friendly school. Many of our faculty and staff have been actively engaged in service to veterans on campus. Last year, all HFC employees were invited to participate in an interactive training exercise to improve their understanding of, and service toward, our student veterans.

The Student Veterans Association is very active on campus and helps students in numerous ways.

“This is a great place for veterans. We couldn’t meet other veterans without having a place like this to call home,” said Sgt. First Class (SFC) (retired) Mark Allen, who served in the U.S. Army for 22 years.

The Veterans Center is small yet comfortable room to relax, giving veterans the chance to speak to other veterans. The room contains photo boards and various free resources, as well as flags of all service branches and the American flag – also called Old Glory.

“Without Ms. Bock’s help, it would be impossible to navigate collegiate life,” said Allen. “As veterans, we’re counting on other veterans to navigate a civilian world and the world of education.”

SFC (retired) Stokes served 32 years in the Army and was in Operation: Desert Storm. His wife of 33 years, Joanne Perry-Stokes, was also present at the ceremony.

“I saw representatives of all branches of the military talking to each other before the ceremony. That was impressive,” said Perry-Stokes.

“This is a nice spot. It’s a place for us to decompress from the classroom and connect with other veterans who can understand the transition from military to civilian life,” said Stokes, who is pursuing an associate degree in supply chain management (SCM) with a projected graduation date of 2020.

The G.I. Bill is not only paying for Stokes’ education at HFC, it’s also paying for his wife’s education. Perry-Stokes is currently working on her doctorate in education at the University of Phoenix.

“His military service is paying for both of our schooling. I’m working on a Ph.D. He’s his family’s hero,” said Perry-Stokes, making her husband blush.

The College now has a dedicated space for these heroes to call home while they're on campus. For more information about Veterans Services at Henry Ford College, please contact Gail Bock, 313-845-9688 or veterans@hfcc.edu.