Notice: This article is more than one year old and is part of the Henry Ford College news archive. Information in the article may be outdated. For the most current news and information about Henry Ford College, please visit hfcc.edu/news, or contact communications@hfcc.edu.
Release Date:
Friday, March 29, 2019 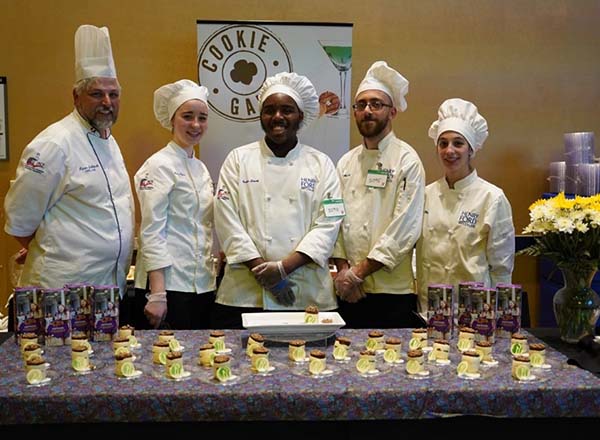 The HFC Baking Club received the CEO's Choice Award as the Girl Scouts of Southeastern Michigan's Annual Cookie Gala at the MGM Grand Detroit on March 28.

“Every year, the Girl Scouts selects cookies for us. This year, it was the Samoa. The Baking Club deconstructed the cookie and made a caramel mousse, a coconut mousse, a white chocolate Samoa crumble, and a sponge cake at the bottom. We also made orange and coconut sauces to really bring out the flavor. We took a chance. It worked out, and we earned the CEO’s Award as a result,” said Jablonski.

This event is the largest Girl Scouts fundraiser, and more than 500 guests attended. Chefs for this year’s cookie competition came from:

“In the six years I’ve been involved with the Baking Club, we’ve won five different awards,” said Jablonski. “That says a lot about the creativity the Club puts into this event.”