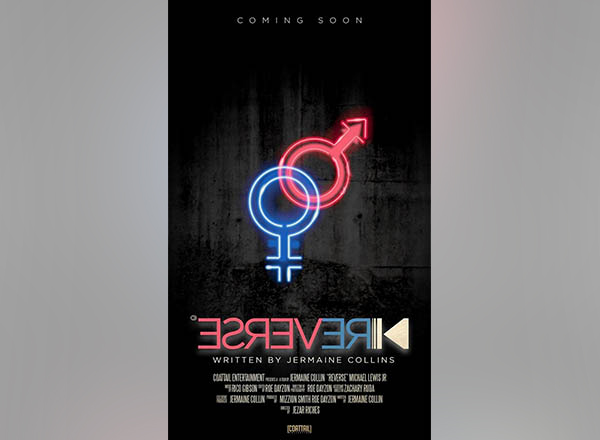 T he short film Reverse – which is set and filmed in Detroit, including the HFC campus – occurs in a world set in the not-so-distant future where males have become endangered.

“The entire male population has suffered a catastrophic decline due to a gender-specific disease,” explained 2010 HFC alumnus Michael “Mizzion” Smith, a producer of Reverse.

Written by Jermaine Collins and directed by Jezar Riches, both Detroit-based filmmakers, Reverse will debut Friday, Nov. 15, at 7:00 p.m. at the Boll Family YMCA, at 1401 Broadway Street in Detroit.

“The story begins five years after the illness has hit, causing the female population to firmly take the mantle of power in governments and businesses throughout the world,” said Smith.

The U.S. government is in the early stages of full re-inclusion of healthy males back into society. Two males, Morris and Roland, who are immune to the disease, are released from an internment camp and integrated back into society.

Reverse of power is a double-edged sword

“This drama reverses the modern structure of privilege and control in today’s society,” said Smith. “Men will see how it feels to be considered a minority. The film shows how the reverse of power can be sweet and sour at the same time – for both men and women.”

Soon thereafter, both Morris and Roland are being blackmailed by a clandestine organization and are given new identities. Sent to Detroit, a city resistant to male re-inclusion and known for negative male bias, their mission is to fracture the cycle of male discrimination the mayor of Detroit and her constituents support by any means necessary.

“We were allowed to use a classroom in the Technology Building to film the part of the script where the main characters meet,” said Smith. “We went through the proper channels to get approval. We would like to personally thank HFC and its Facilities Management team for helping with this.”