Notice: This article is more than one year old and is part of the Henry Ford College news archive. Information in the article may be outdated. For the most current news and information about Henry Ford College, please visit hfcc.edu/news, or contact communications@hfcc.edu.
Release Date:
Tuesday, February 19, 2019 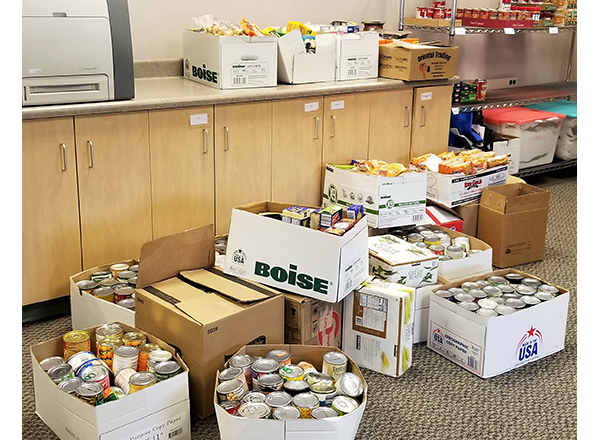 CAPTION: The major food donation required significant sorting, which we did happily!

In mid-February, the Universal Learning Academy (ULA) in Westland donated more than 1,700 pounds of food to the HFC’s Hawks’ Nest food pantry.

According to ULA teacher Haifa Mouslemary, members of the school’s National Honor Society and Character LEADS Student Committee hosted their annual food drive to raise awareness about hunger and to support families in need. They raised more than 3,200 food items/canned goods – approximately 1,710 pounds – to be donated to local organizations.

Michigan Solicitor General and HFC Trustee Fadwa Hammoud informed Mouslemary about the Hawks’ Nest and its mission. The majority of the 3,200 food items were donated to the Hawks’ Nest due to its unwavering commitment to supporting college students with food insecurities.

“We’re honored to contribute to such a worthy cause and allow students to give back to their local community,” said Mouslemary.

HFC Student Activities Associate Mandy Earl had to take two trips to get the food. On her second trip, she was joined by HFC e-Instructional Designer Glenn Gaddis and HFC Admissions Recruiter Kristine Rouleau.

“Between the three of us, we filled up three SUVs and one pick-up truck – that’s a lot!” said Earl. “I want to thank the ULA deeply for their thoughtfulness and generosity. This is quite a gift, and our students will benefit for a long time.”