Halloween, All Saints', All Souls' holidays 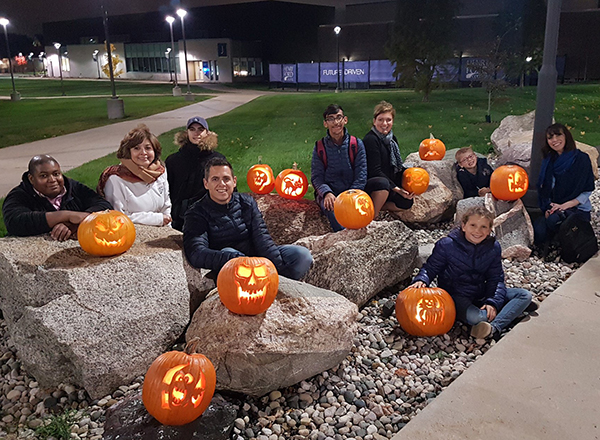 Photo: A group of Henry Ford college international students were introduced to pumpkin carving for the first time. Pumpkin carving is a longstanding Halloween tradition in the U.S.

On October 31, many Americans celebrate Halloween, and some celebrate All Saint’s Eve or All Hallow’s Eve. The following day is celebrated by Catholics and Anglican Christians as All Saints’ Day, which is followed by All Souls’ Day, or Día de los Muertos in Mexican tradition.

Halloween and All Saints’ Eve

All Saint’s Eve (or All Hallow’s Eve) and Halloween fall on the same day each year, October 31. The concurrent holidays have been influenced by both Christian and pagan beliefs and rituals.

The tradition of Halloween originated partly with the ancient Celtic festival of Samhain (pronounced “sow-win”), a festival to welcome the “dark half of the year.” People would light bonfires and wear costumes to ward off spirits of the dead.

Over a period of centuries, many different types of celebration were introduced into this autumn day, and there was some convergence between All Saints’ Eve and Halloween. The custom of “trick-or-treating” had some origins in Christian rituals. There was an English custom of knocking on doors to ask for a “soul cake,” after which the recipients would offer prayers for the dead of the household. In some places, the door-knockers would sing, tell a joke, recite a rhyme, or perform a kind of trick before receiving a treat. Over time, the idea evolved to a light-hearted warning that a prank would be performed if the resident did not provide a treat. In other traditions, trick-or-treat originated as food and beverage offerings to powerful gods and goddesses who could bless or curse a person's life.

Other well-known Halloween rituals have both Christian and pagan origins. The importance and mystery of life after death was central in the Western world from the early Middle Ages, when charades, pantomimes, and short plays were common. The tradition of masquerading in costumes on Halloween probably came from these performances. In the Christian tradition, the performances were a means of warning people to heed the message of salvation. The traditions of goblins and witches with cats (which were ancient symbols of the devil) were recognized by Christians and some pagans as bad omens.

Halloween has also been the culmination of fall festivals in northern climates to celebrate the harvest and give thanks for abundance, in preparation for a long winter.

Today, Halloween is widely celebrated as a light-hearted day of costumes, decorations, carved pumpkins, and door-to-door trick-or-treating, in which candy and other treats are given to costumed children. This includes my six-year-old son, who will be a tiger, and his five-year-old sister, who will be an owl (I preferred a Hawk!).

On or near Halloween, some adults attend costume parties and other celebrations.

All Saints’ and All Souls’ Day

These two holidays are celebrated by Catholics and by Anglican Christians, which are denominations, or branches, of Christianity.

All Saints’ Day is November 1. It is an opportunity for Christians to remember those they consider saints and martyrs who have died. It is considered a “holy day of obligation,” which means believers should attend church services on that day.

In the year 837, Pope Gregory IV (the pope is the head of the worldwide Catholic Church) established the Feast of All Saints as an annual commemoration on Nov. 1.

All Souls' Day falls on November 2. The day provides a continuation of the spirit of All Saints' Day, and is an opportunity for Catholics and Anglican churches to commemorate believers who have died. They remember and pray for the souls of people who are in purgatory. In Catholic theology, purgatory is a place (or state) in which the souls of believers who have died atone for their sins before being allowed to enter heaven. While different Christian denominations have divergent beliefs about how believers enter heaven, most Christians believe that heaven is a transcendent place where believers will spend eternity in the company of God. Heaven is considered a place of unparalleled beauty where there is no pain, suffering, or sin.

Unlike All Saints’ Day, All Souls’ Day is not a day of religious obligation, but some Christians still attend services. A prayer cycle, the Office of the Dead, is read in churches that day. Catholics may inscribe the names of their loved ones in the Book of the Dead. Other rituals include celebrating a Requiem Mass for the dead and visiting family grave sites.

In Mexico, El Día de Los Muertos (Day of the Dead) is a two-day holiday that corresponds to All Saints’ and All Souls’ Day. It is a colorful celebration in which people wear festive makeup and costumes, hold parades and parties, and sing and dance in honor of their lost loved ones. Families take picnics to their family graves and leave food out for their deceased relatives.

At Henry Ford College, we are proud of our multicultural community, which includes race, national heritage, and myriad expressions of religion, culture, history, and other forms of human diversity. We welcome every opportunity to learn about, and from, people who are different from us. This knowledge and recognition makes us stronger, and better able to support and connect with our campus and local community. I encourage you to do that on these holidays, as every holiday.