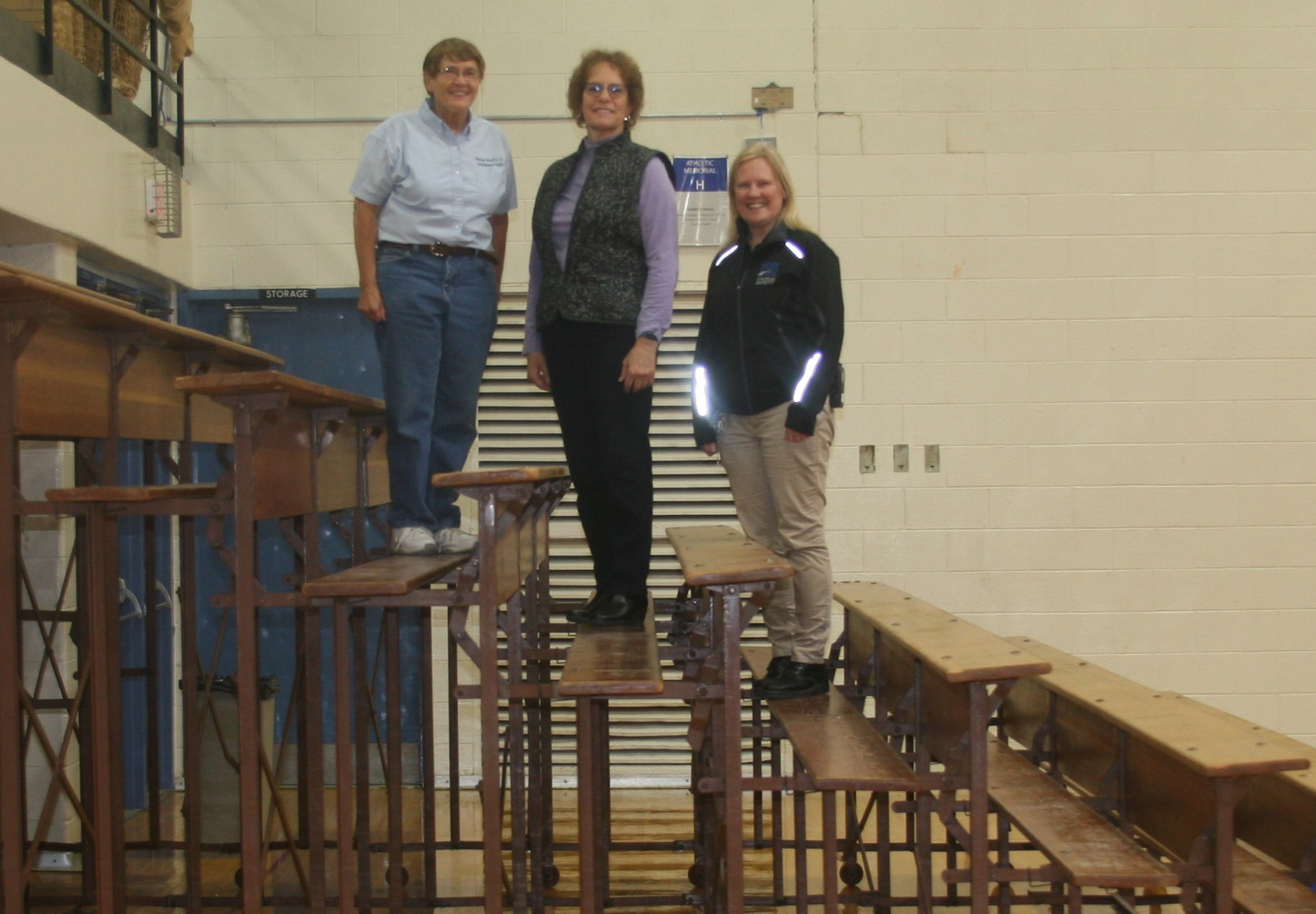 Until May of this year, the Athletic Memorial Building (H) had space-age bleachers. They were installed before the first moon landing.

Not surprisingly, the bleachers were nowhere near modern standards for comfort and safety that had developed over the past 50 years. When the bleachers were assessed for replacement, the representative from Interkal, a Kalamazoo-based company that is installing new bleachers this summer, claimed he had never seen bleachers from that era.

Former Hawks standouts Mary Jo Perkovich, Nancy Bryden, and Karen Schoen recently gathered for a photo shoot on the old bleachers for one last time. Bryden coached both Perkovich and Schoen. All three shared their memories of coaching and playing for the Hawks.

An alumna of Riverside High School in Dearborn Heights, Bryden attended HFC from 1966-68, while working for the city of Dearborn Heights as a sports director and sports writer. She transferred to Eastern Michigan University in Ypsilanti, where she earned her bachelor’s degree in health, physical education, and recreation, as well as her elementary teaching certificate and her master’s degree in physical education. She played for EMU’s softball team for two years and served as captain her final year.

Bryden began her coaching career at Divine Child High School in Dearborn in 1970, coaching basketball and softball. Under Bryden’s leadership, the women’s softball team became the ASA State Softball Champions in 1974 and won their first Class B State Championship in 1975.

“In softball, we were ranked nationally, finishing in first or second place most years when I coached,” said Bryden. “There are so many memories from every team I was fortunate enough to coach. I remember how committed the players were, and how hard they worked. They were always proud to be Hawks!”

Perkovich has been a physical education teacher at Mary Helen Guest Elementary School in Walled Lake for nearly 30 years. She is also an adjunct faculty member at HFC, and the building supervisor for HFC basketball games.

A Divine Child alumna, Perkovich attended HFC from 1975-78, earning her associate degree in liberal arts. She attended HFC on a volleyball scholarship and later basketball and softball scholarships. However, those two teams did not exist at the time. Then-AD John O’Hara told Perkovich that she’d need to get 200 signatures from classmates for HFC to start those two teams.

Perkovich got those 200 signatures and then some, proving there was a need for an equalization of men’s and women’s sports at HFC. Bryden became Perkovich’s coach for the basketball and softball teams. From 1978-91, Perkovich served as Bryden’s assistant coach for the softball team. She even turned down a volleyball scholarship at EMU – where she earned her bachelor’s and master’s degrees in physical education and her classroom endorsement – to coach alongside Bryden.

“Those were the best years of my life,” said Perkovich. “Back then, it was the joy of knowing the women were being treated the same as the men.”

Schoen, the HFC Campus Safety Manager, was the center fielder on the softball team at HFC alongside Perkovich and under Bryden. Schoen attended HFC from 1977-80, earning her associate degree in arts. The Dearborn High School alumna went on to earn her bachelor’s degree in arts from Saginaw Valley State University (SVSU).

“We had no athletics one year (1978-79) because we lost a millage vote, and then we got athletics back.” recalled Schoen. “Even though other schools were recruiting, I decided to remain at HFC and finish my two-year eligibility. Then I transferred to SVSU.”

“Being ranked nationally so many times and having All-American players that left HFC and received scholarships to play at Division 1 colleges was a point of pride,” said Bryden. “Some of the hotels we stayed at during our spring trips always commented that HFC had the most respectful and well-behaved team of all the teams that stayed at their hotel. The support the College had for scholarships at that time enabled us to recruit and bring in superior student-athletes.”

The new bleachers will be installed this summer and in place for the start of the Fall season at HFC. Check out our sports and home schedules at www.HenryFordHawks.com.