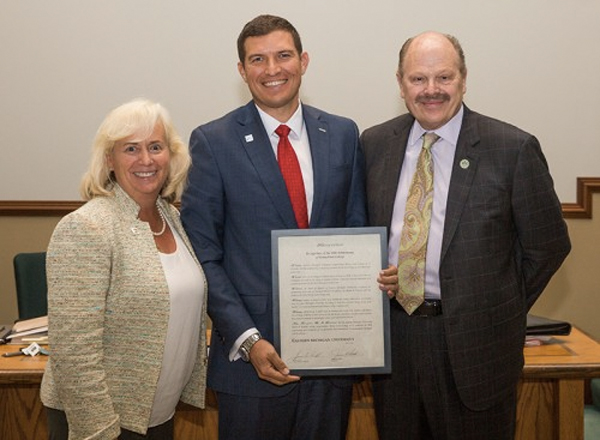 The EMU Board of Regents presented a resolution to HFC President Russell Kavalhuna on Thursday, June 13. The resolution was in recognition of 80 years of serving students, our community, and our state.

Henry Ford College and Eastern Michigan University have more than two dozen articulation agreements, with many more in process. These agreements allow students to study at HFC and transfer seamlessly to the program of their choice at EMU to complete their bachelor's degree.

Both institutions are committed to affordable, community-based education and to preparing Michigan's workforce of the future.

The Resolution, by EMU's Board of Regents, is here. It states:

Whereas, Eastern Michigan University congratulates Henry Ford College as it celebrates its 80th Anniversary of preparing students for an ever-changing workplace and world; and,

Whereas, since its founding as Fordson Junior College in 1938, it has grown into an institution that reflects the value of student-centered, community-focused education as it prepares graduates for the lives they aspire to lead; and,

Whereas, the Board of Regents of Eastern Michigan University recognizes the outstanding leadership of President Russell Kavalhuna, the Board of Trustees, and the faculty and staff of Henry Ford College; and,

Whereas, Eastern is proud to have more community college articulation agreements than any other Michigan university, including 21 with Henry Ford College, as we work together to expand opportunities for today’s college students; and,

Whereas, collaborating in fields such as nursing and social work, Eastern and Henry Ford College continue to drive forward into the future, providing education and expertise that connects students to meaningful careers and inspirational futures;

Now, therefore be it resolved, that the Eastern Michigan University Board of Regents hereby congratulates Henry Ford College as it celebrates its 80th Anniversary and commends its leadership for its dedication and commitment to southeastern Michigan and its citizens.

The EMU story on this event is here.