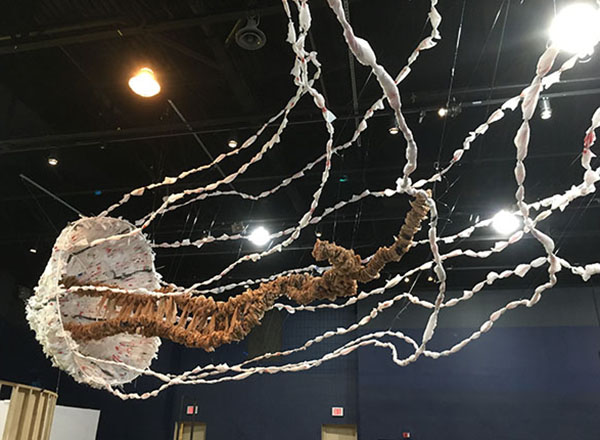 ETERNAL, the name of HFC biology instructor Maris Polanco's jellyfish model, is on display at the Michigan Science Center in Detroit.

Maris Polanco, who teaches biology at HFC and Wayne State University, has never limited herself to just one interest or identity.

Case in point: Her model of a 60-foot jellyfish called ETERNAL. Made from plastic bags and suspended from the ceiling, ETERNAL is on display with 30 other pieces of artwork about water and humankind’s relationship to water as part of the free exhibit called DEPTH, running from Saturday, June 8, to Saturday, Aug. 17, at the Michigan Science Center.

“I love art and music as much as I love science – although I made a deliberate decision about which would make the most sustainable career,” said Polanco, of Detroit, with a laugh.

“Creating this giant jellyfish was the first art piece of its kind I had made, but it wasn’t too difficult!” said Polanco, who earned her bachelor’s degree in human biology from Michigan State University and her master’s degree in pharmacology from the University of Michigan.

ETERNAL brings awareness to the ongoing problem of plastic in the ocean and the dangers it presents for ocean wildlife. Floating in ocean tides, these not-so-ephemeral wisps of plastic highly resemble a favorite snack of many large sea creatures: jellyfish. The consequences have made the news. A pilot whale dies, malnourished, with 20 pounds of plastic bags in her stomach. More than half of all sea turtles appear to have eaten plastic bags, thinking they were jellyfish. The notorious longevity of plastic and the amazing longevity of certain jellyfish species make for an “interesting – if not macabre – marriage of ideas.”

The jellyfish model is made of more than 1,200 plastic bags, which were sourced from approximately 15 people over the course of three months.

“This says a lot about our consumption of plastic bags,” said Polanco. “Plastic pollution of our oceans is one of the most tragic events of the modern age. I wanted to draw attention to the problem while also educating people about the real mechanism of sea creature death via plastic. As plastic bags float in the ocean, bacteria that grow on them mask the scent of plastic. Many animals, including whales and turtles, mistake the bags for jellyfish.”

It took Polanco three months to create the jellyfish. She worked with an assistant for up to 10 hours/week. She transported the jellyfish to the science center in pieces. Coiled-up tentacles took up very little space in her car, according to Polanco. The body of the jellyfish was built in triangle wedges and assembled on site.

“All my coworkers and friends have been extremely excited about its completion and display,” said Polanco.

Both Polanco and Dr. Jolie Stepaniak, HFC Director of Biotechnology, encourage HFC employees and students to visit this intriguing exhibit.

“Maris’ piece is not only impressive and beautiful; it demonstrates how the complementarity of science and art can make a strong statement about humans and the environment,” said Stepaniak. “We are proud that Maris is part of the Department of Biological Sciences at HFC.”

Admission to the DEPTH exhibit at the Michigan Science Center is free. For more information, contact Polanco at mcpolanco@hfcc.edu.