After graduating, Abbie Begley will play softball at Concordia next year 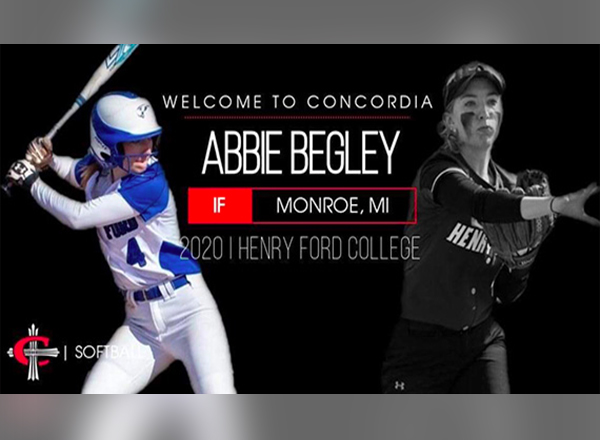 Abbie Begley, a shortstop for the HFC softball team, thought she didn’t want to play softball after graduating from high school.

Then she met Steve Brown, the HFC softball coach, who offered her a scholarship.

“He can be very persuasive,” said Begley, of Monroe. “He was enthusiastic about wanting me to come play for him.”

“Abbie is a really tough, hardworking player who is going to make an impact on our program. She’s humble and a great teammate, so we’re thrilled to have her as part of our program,” said Hailey Cavanagh, head softball coach at Concordia.

“After we played Concordia in September, (Cavanagh) came up to me and offered me a scholarship. She spoke to Coach Brown about me before the game. He’s very good at putting players in contact with any school that’s interested in us,” said Begley. “I’m excited for the opportunity to finish my college career at Concordia with such a high caliber program and great coaches.”

No shortage of activities

Softball has been an important factor in Begley’s life since she was 3. The fifth of six children, she played softball all four years at Monroe High School, graduating in 2018. She also played basketball, participated in the marching and jazz bands, wind ensemble, and was active in the Health Occupations Students of America during high school.

Begley will graduate from HFC in 2020, earning her associate degree in business administration. She currently holds a grade-point average of 3.78. At Concordia, she plans to study sports and entertainment business.

Begley has enjoyed her experience at HFC.

“I like how the softball program is run. Each year we get better athletes. Most of us could’ve played at 4-year schools, but we’re competing here. Even though we’re a community college, we’re very competitive and can give some of the bigger schools a run for their money,” said Begley. “Most of the professors are very accommodating for student athletes, knowing we have practice and we’re on the road a lot. They’re very understanding.”

“Abbie’s a great hitter and a tough, hardworking player,” said Brown. “Although her main position is shortstop, she can play all of the infield and outfield positions. She’s very supportive of her teammates and just a joy to coach.”