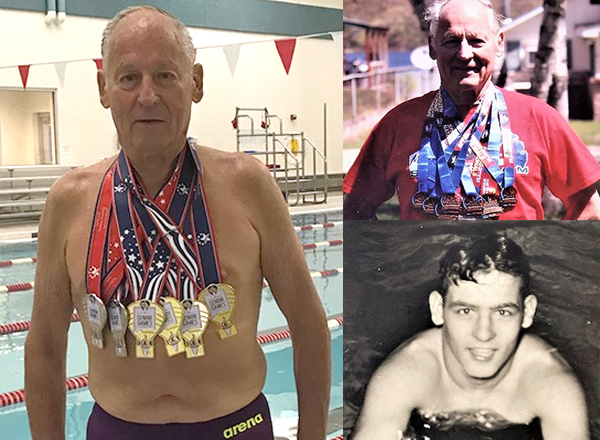 HFC alumnus Joel Lockwood, whose story we shared last year, is still going strong at 85 years old, setting records in the pool and showing no signs of slowing down.

On June 20, Lockwood, a retired General Motors engineer who served in the U.S. Army, turned 85. To celebrate this milestone birthday, he swam in a new age bracket – the 85-89 division – the next day at the National Senior Olympic Games in Albuquerque, NM.

“I’m low man on the totem pole, but I’m making my way up,” Lockwood, of Lake Township, said with a chuckle.

“I did well there,” said Lockwood. “There was a woman there who was 100. She was the oldest swimmer. The oldest male swimmer was 94.”

All of the prior records had remained unbroken for 10 years.

“Even my silver medals beat the national record time! Mr. Clarke was just a little bit faster than me. He beat me in the 50 freestyle by only 75/100s of a second, so that’s pretty doggone close. He did the back-style flip-turn. In my day, you had to touch the wall while swimming on your back. These days, you can approach the wall and do a flip-turn, which is much, much faster. He did the flip-turn and I went by the old style,” explained Lockwood. “It was a great meet. I knew I was in decent shape for my age bracket.”

Not one to rest on his laurels, Lockwood also participated in U.S. Masters Swimming meet at Eastern Michigan University in Ypsilanti on July 21.

“Not too shabby for someone my age,” he said. “I did pretty well.”

On Aug. 12, Lockwood competed at the Michigan Senior Olympics, which were held at Oakland University in Rochester.

For these meets, Lockwood wore a high-performance, carbon-fiber, power-skin swimsuit. He credited his improved times to his perfect-fitted high-tech swimsuit, the first he’s ever owned. He’s convinced it helped shave seconds off his times.

“They’ve got these new high-tech swimsuits, which run $200-$500,” said Lockwood. “At this stage of the game, there’s no way I’m gonna spend that kind of money.”

The swimsuit was a gift from ARENA, the swimwear company that manufactures the suits.

“That suit is fantastic!” marveled Lockwood. “There’s no drag whatsoever. No water gets in. It’s almost like you’re wearing nothing at all. It doesn’t hold you back. It’s unbelievable.”

In his youth, Lockwood was a two-time All-American swimmer at HFC and set two U.S. Army national records. During his Dearborn High School days, he was on the swim team all four years.

In 2018, Lockwood was inducted into the Sports Hall of Fame in Dearborn.

He’ll be swimming in the Michigan Masters Meet in DeWitt on Dec. 7. Afterward, he’ll take a well-earned break.

“I’ll get a little bit of a break before the December competition. I can use it,” he said. “After that, I can rest for a while.”