Notice: This article is more than one year old and is part of the Henry Ford College news archive. Information in the article may be outdated. For the most current news and information about Henry Ford College, please visit hfcc.edu/news, or contact communications@hfcc.edu.
Release Date:
Monday, July 9, 2018

"What I Did Last Summer" performances Aug. 9-19 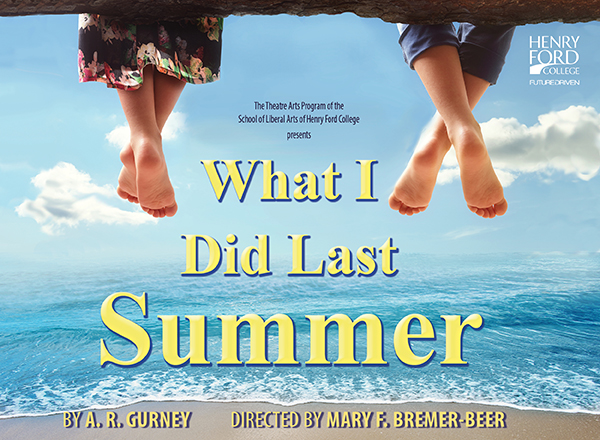 Summer is set circa 1945, during the final days of World War II, at an affluent vacation colony on the shores of Lake Erie. It is a coming of age story centered around 14-year-old Charlie, a kind but naïve and somewhat rebellious boy who struggles with trying to be his own person yet trying to please his mother and his family.

The play opens with Charlie summering with his mother Grace and older sister Elsie before he goes off to an expensive boarding school in the fall. Although he intended to laze away the summer, he does odd jobs for Anna Trumbull, a former mistress of a rich doctor who bought her the country house in which she lives. Very quirky, Anna is a precursor of a hippie who teaches Charlie how to paint and sculpt.

As a result, Charlie is exposed to Anna’s radical perspectives about life and love. That persuades Charlie to reject the notion of going back to school, putting him at odds with his conservative mother. In the end, it becomes a showdown between Grace and Anna in a clash of philosophies that raises as many questions as it answers, setting Charlie on the path to becoming the man he’s destined to become.

Summer debuted in late 1981. Like the majority of Gurney’s plays, Summer explores the theme of the declining upper-class lifestyle of a White Anglo-Saxon Protestant (WASP) in America. Several of Gurney’s plays are loosely based on his patrician upbringing, including The Cocktail Hour *and *Indian Blood.

“I think it’s a sweet story. It’s a coming of age story about Charlie that will appeal to people of all ages – whether they’re 10 or 100. It takes a look at a bygone generation; it’s really nice to go back and live in that era again,” said Bremer-Beer.

Tickets for* What I Did Last Summer* are $14 for general admission and $10 for HFC employees, senior citizens, and students with a valid photo ID. If you purchase your tickets before Tuesday, July 31, it will only cost you $5.