President Kavalhuna presents his first State of the College address 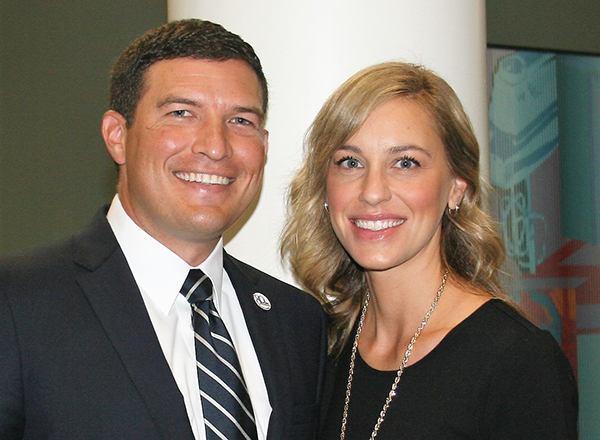 In a packed Forfa Auditorium, HFC President Russell Kavalhuna made his first State of the College address Aug. 21, asking all HFC faculty and staff members to come together as one as the 2018-19 academic year begins Aug. 23.

“Some of the things I’ve learned that make me proud about HFC,” said Kavalhuna, “include the fact that this institution is filled with talented people who don’t need me to be a manager. I am here as a leader, and we will continue to be excellent in services to our community and to students.”

"I have seen something that makes me so encouraged," he noted. "That's a broad agreement about why we are all here. We have devoted our lives to education. If we make this institution a gateway to economic and social prosperity for our students, we will have lived a meaningful life."

The respect and honor he described extends directly to colleagues all over campus.

“If you see someone who does something well, say it. Make it a habit,” said Kavalhuna. “That will be the first step in establishing a positive culture and environment. We cannot be successful if we have the kind of divisions that may have existed in the past.”

HFC Board of Trustees Chair Dr. Michael Meade began the day by introducing Kavalhuna and making some remarks of his own.

“We have a president with an authoritative management style, which means he listens,” said Meade. “He is – and here’s the magic word – inclusive! I have faith in him to make sure the College shines like a star.”

Kavalhuna officially began July 2. He is currently halfway through his Listening Tour, where he speaks to members of the College community on HFC’s strengths and challenges. Building on strengths and addressing challenges will be among his hallmarks as a leader.

Kavalhuna highlighted a few major accomplishments from the past year, making sure not to take credit for them (“How could I?” he said.)

Credit where it is due

Kavalhuna introduced new faculty and staff members from across the College. He also congratulated Susan Shunkwiler, Dean of the HFC School of Health and Human Services, who recently earned her doctorate from Madonna University in Livonia. He acknowledged the efforts of each of HFC’s collective bargaining units.

“I truly believe faculty is the lifeblood of a public education institution,” said Kavalhuna. “I have not seen a leader who has given so much and so much time as John McDonald [head of Local 1650]. He truly wants HFC to be a success.”

Kavalhuna praised John Satkowski, HFC Vice President of Financial, Facilities, and Auxiliary Services, who served as Interim President from December 2017 through June 2018. Satkowski received a standing ovation for his leadership.

Kavalhuna acknowledged Dr. Michael Nealon, HFC Vice President of Academic Affairs, calling him gracious, welcoming, and a great partner and leader on the academic side of the College.

He thanked Becky J. Chadwick, Vice President of Strategy and Information, for her 18 years of service and dedication to the HFC community. Chadwick is leaving HFC next month to become Executive Director of Institutional Research and Effectiveness at the University of Michigan-Dearborn, her alma mater.

“Becky represents the best of us,” said Kavalhuna. “Becky ran the presidential search – I can’t quibble with the outcome – which is some of her best work,” he added, tongue-in-cheek, much to the amusement of the audience.

He wished Chadwick great success and fulfillment in her new role as the crowd burst into applause. He went on to introduce Dr. Lori Gonko, HFC Coordinator of Program Improvement and Effectiveness, as Interim Vice President. She was selected by the cabinet for the role.

Only one thing can hold us back

Kavalhuna set the stage for a core shared goal: for HFC and our students to be successful. Not everyone will see eye-to-eye on how to achieve success, but Kavalhuna asked that we disagree in a respectful, civil manner, and find a middle ground to move forward.

By working together in effective ways, Kavalhuna believes that HFC can be more than just a successful educational institution in Southeast Michigan, but a gem – a beacon and a model – for high-quality education in Michigan and throughout the United States.

He concluded with what he called remarks from the heart.

“Talk to people, not about people,” he asked. “Let’s attack problems together, and not attack people. Nothing can hold us back but ourselves. Help me look to the future, because we’ll never get there if we let anything from our past cloud our vision to serve students and the community. I’m excited to be your colleague. Take me being here as an opportunity to hit reset.”