Notice: This article is more than one year old and is part of the Henry Ford College news archive. Information in the article may be outdated. For the most current news and information about Henry Ford College, please visit hfcc.edu/news, or contact communications@hfcc.edu.
Release Date:
Monday, March 19, 2018

Marvel, The Inhumans, Star Wars, and the Black Panther effect 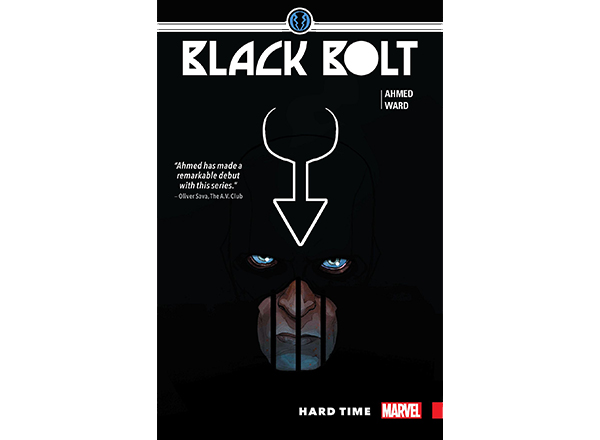 That’s the single word Saladin Ahmed, a 1997 HFC alumnus, used upon learning Black Bolt, the monthly comic book series he writes for Marvel, made it to Entertainment Weekly’s “Best of 2017” list. 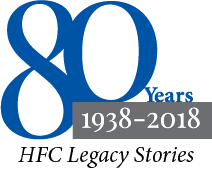 “That was thrilling. This was the first comic I’ve ever written,” said Ahmed. “I’m really amazed at the reception that it’s received. I feel lucky – that’s the main thing I should say. Lucky.” 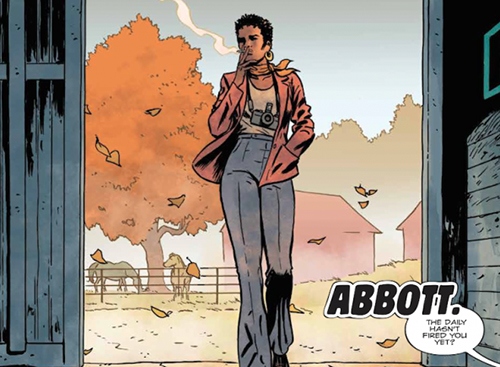 Created in 1965 by writer Stan Lee and artist Jack Kirby – who either created or co-created other well-known superheroes, including the Hulk, Iron Man, the X-Men, et al – Black Bolt is one of their lesser known characters, although he was played by Anson Mount (Hell on Wheels) on ABC’s short-lived 2017 series The Inhumans.

The king of the Inhumans, a race of genetically-altered super-beings living on the moon, Black Bolt flies and possesses superhuman strength but must remain mute because his voice is so destructive, it can level a city.

“He’s an odd character who’s incredibly powerful, but incredibly mysterious,” said Ahmed. “He’s been around since 1965 and appeared in hundreds of other comics. He’s this cult favorite who’s been written here and there… To contribute to that line of stories does feel like pressure. I’m a diehard Kirby fanboy and to play with the same toys he helped build is awesome in the full sense of the word.”

One challenge when writing Black Bolt is that he doesn’t talk. Ahmed, along with artist Christian Ward, embraced that.

From mute superheroes to Star Wars 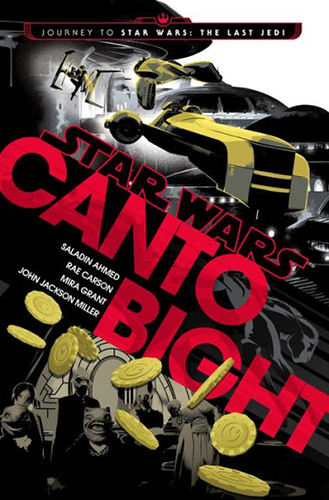 “Approaching him has been this cool, nerdy experience, but also a real opportunity because he’s not the Hulk or Spider Man. He’s really been or underexplored as a character. I’ve been trying to get inside his head like never before,” said Ahmed. “It’s fun coming up with ways for him to express himself. I’m a prose writer by training, so there’ll be narrative captions but I can’t lean too heavily on them, because comics is a visual medium. The heavy lifting will be done by (Ward), who’s a genius. There’s a lot of stuff I don’t have to do, because he can.”

In addition to Black Bolt, Ahmed contributed the novella “Rules of the Game” to the anthology Star Wars: Canto Bight, which appeared in December 2017 to coincide with the release of the blockbuster movie Star Wars: The Last Jedi. Canto Bight is the casino city featured in Last Jedi.

“It’s a story about two aliens who are in the background during the film. They’re not even speaking characters,” said Ahmed. “One of them is a lifelong criminal, and the other is basically a door-to-door salesman. They’ve both been at their jobs for 100 years, so it’s a fun pairing. It was a wacky buddy mix-up, kind of like Trading Places or 48 Hours (both Eddie Murphy films) with a lot of misadventures.” Ahmed jumped at the opportunity to add to the mythos of George Lucas’ beloved space opera.

“It was definitely a lot of fun,” he said. “It was a very tight schedule because it was produced in anticipation of the film. There was a lot of secrecy; there were secret servers to look at files, things like that.”

His current project is Abbott, a horror-crime comic book series published by BOOM! Studios that’s set in Detroit circa 1972. Inspired by the TV shows The X-Files and Kolchak: The Night Stalker, the main character is an African-American woman named Elena Abbott, a reporter for the fictional Detroit Daily who chases stories that involve supernatural elements.

“As writers, we want to feel like we’re doing something new,” he said. “We’re not doing things the same as the person who told the story before us. While I love the dogged investigator and this wary, noir hero, it’s almost always been a white guy at the center of the story. Flipping that in terms of race and gender, it allows the story to have a freshness to it. And also it opens up a bunch of questions in terms of both the challenges and the resources that somebody might have who comes from a different background than the heroes we traditionally see in these roles.”

Setting Abbott five years after the 1967 Detroit riot was an intentional choice. 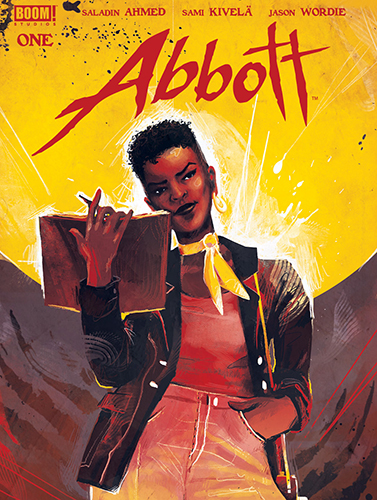 “Detroit is a city where that history’s been glossed over or sensationalized. I wanted to tell a different story about the city and about that era. I wanted to show another side of what was happening in Detroit in the early 1970s. We often hear this story that in 1967 there were the riots in Detroit and everything went downhill from there. Even people who are sympathetic to Detroit tell that story.

A Dearborn native and Fordson High School alumnus, Ahmed’s father is Ismael Ahmed, who co-founded ACCESS. Based in Dearborn, ACCESS is the largest Arab-American human services organization in the United States.

After Fordson, Ahmed graduated with his associate degree in general education from HFC. He transferred to the University of Michigan (U-M) in Ann Arbor, earning his undergraduate degree in American Culture. He later earned an MFA in creative writing from Brooklyn College in New York City and a master’s degree in English from Rutgers University.

His course as a writer was set when he attended one of Detroit-based poet Kim Hunter’s poetry readings in his youth.

“Just seeing what he could do with words, how they affected people – that’s power,” recalled Ahmed. “That’s what I wanted to do.”

His first novel, 2012’s Throne of the Crescent Moon was nominated for several awards, including the prestigious Hugo Award. It won the Locus Award for Best First Novel.

“It’s Arabian Nights meets Lord of the Rings,” he said. “It’s the story of a world that looks like the medieval Islamic world, but it’s a made-up world called the Crescent Moon Kingdoms.”

Matt Linton, who co-organized the conference, served as moderator. The topics centered on the history of diversity and the more recent pushes toward inclusivity in the comics industry, business, and marketplace. 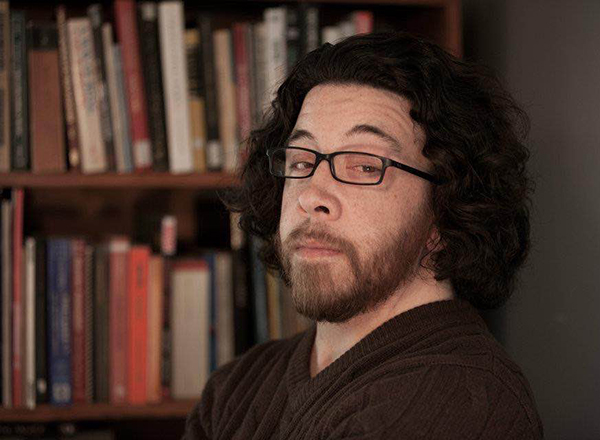 “As all participants were representative or allies of minorities, the different voices were congruent with each other throughout,” said Merritt, who attended HFC. “Specifically, we spoke about challenges we faced and experiences we’ve shared about adversity and how each has been addressed and overcome. Saladin spoke about his upbringing in the south end of Dearborn and how that played a role in his writing. And how his Arab-American heritage influenced his writing and inspired his prose.”

One timely subject raised at this panel was the Black Panther dominating the box office the weekend of Feb. 16, grossing a record-setting $426.8 million worldwide opening weekend. This was the 15th largest opening weekend of all time, and the movie is predicted to gross $1 billion.

The 18th movie in the Marvel Cinematic Universe (MCU), Black Panther is the first movie in the MCU to be directed by a black man (Ryan Coogler, Creed) and to feature a predominantly black cast, including Chadwick Boseman (Marshall) as T’Challa, aka the Black Panther. It also stars Michael B. Jordan (Creed), Oscar winner Lupita Nyong’o (12 Years a Slave), Oscar winner Forest Whitaker (The Last King of Scotland), Oscar nominee Angela Bassett (What’s Love Got to Do with It), Danai Gurira (The Walking Dead), and Letitia Wright (Ready Player One).

In turn, the Black Panther – another Lee/Kirby creation that premiered in 1966 – is the first super-hero of African descent in mainstream comics. T’Challa is king of the fictional African nation, Wakanda, and a member of the Avengers. Boseman first appeared as T’Challa in 2016’s Captain America: Civil War.

Besides being a critically-acclaimed blockbuster, Black Panther has become a cultural touchstone. It has inspired fund-raising initiatives across the nation – including Michigan – to take African-American kids for screenings.

“I’m pleasantly surprised to see what a massive phenomenon it’s become,” said Ahmed. “I’m not just talking about sales, but seeing the film extend beyond the superhero audience. This just seems like another level. It was a fantastic superhero movie, but also a smart movie and innovative for American action movies beyond standard superhero stuff.”

There are important reasons that it diverged from a lot of action flicks, he says. “It was super innovative for a blockbuster, both in terms of diversity and the ethics of it. The resolution is a lot different than most American action movies. I think it’s the payoff of something that’s been happening for a while. Audiences – geeks – have always been a more diverse community than people knew or give it credit for, and we’ve seen that come to the fore over the past couple of years. I can only hope it gets more pronounced. I think it’s impossible to put that genie back in the bottle, thank God.”