Notice: This article is more than one year old and is part of the Henry Ford College news archive. Information in the article may be outdated. For the most current news and information about Henry Ford College, please visit hfcc.edu/news, or contact communications@hfcc.edu.
Release Date:
Tuesday, September 25, 2018 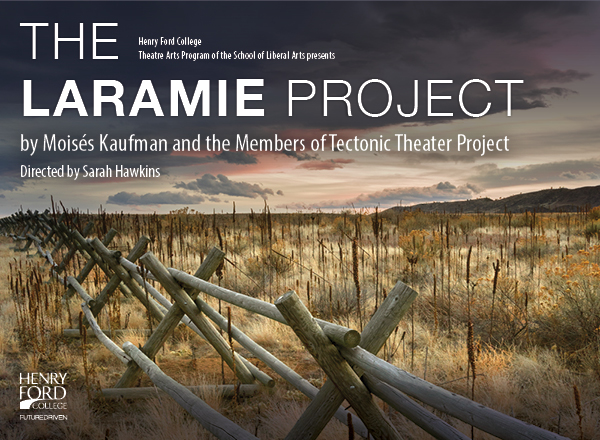 The Laramie Project details the reaction to the 1998 murder of Matthew Shepard, a gay college student in Laramie, WY. On Oct. 6, 1998, Shepard – who attended the University of Wyoming – was brutally beaten and tied to a fence on the outskirts of Laramie. He died six days later due to severe head trauma at the age of 21. His murderers, Aaron McKinney and Russell Henderson, each received two consecutive life sentences.

Shepard’s murder was a watershed moment that was denounced as a hate crime, bringing national and international attention to hate crime legislation at the state and federal levels. In 2009, the U.S. Congress passed the Matthew Shepard and James Byrd Jr. Hate Crimes Prevention Act (a.k.a. the “Matthew Shepard Act” or “Shepard/Byrd Act”). On Oct. 28, 2009, President Barack Obama signed the legislation into law.

The Laramie Project draws upon hundreds of interviews conducted by the theater company with inhabitants of the town, company members’ own journal entries, and published news reports. It is divided into three acts. The play debuted in 2000 and inspired many grassroots efforts to combat homophobia.

Tickets for The Laramie Project are $15 for general admission and $12 for HFC employees, senior citizens, and students with a valid photo ID.

To purchase tickets, go to www.hfcc.edu/campus-life/theatre. For questions or more information, call 313-845-9600.