Notice: This article is more than one year old and is part of the Henry Ford College news archive. Information in the article may be outdated. For the most current news and information about Henry Ford College, please visit hfcc.edu/news, or contact communications@hfcc.edu.
Release Date:
Monday, February 5, 2018

Agatha Christie's most famous mystery performed at HFC in April 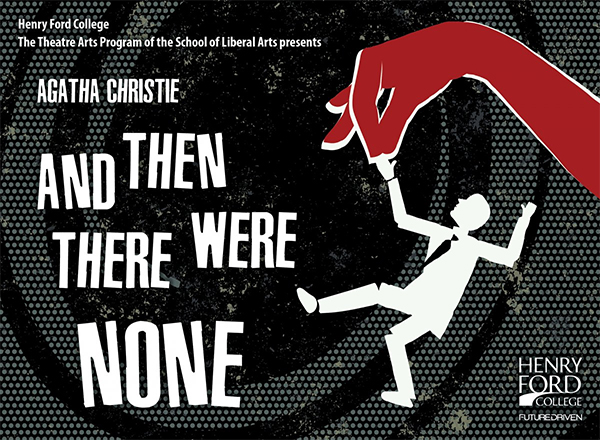 The Henry Ford College (HFC) Theatre Arts Department will present And Then There Were None, a stage adaptation of Agatha Christie’s renowned mystery novel of the same name, April 5-15.

Presented by special arrangement with Samuel French, Inc. and directed by Christopher Bremer, And Then There Were None will run for eight performances in the Adray Auditorium in the Grant U. MacKenzie Fine Arts Center (Building F on the main campus), on the following dates and times:

In And Then There Were None, 10 complete strangers travel to a remote island under false pretenses, such as enjoying a summer vacation or being offered employment. These 10 people have nothing in common except that they had caused the deaths of others. A phonograph lists the details of each of their crimes the first night on the island after dinner. One by one, they start to die. Each death corresponds to a verse in the nursery rhyme “Ten Little Indians” all the way through the final verse: “And then there were none.”

“One of Christie’s darkest tales, And Then There Were None is a masterpiece of dramatic construction. Its growing sense of dread and unfaltering tension will keep you guessing until the very end,” said Bremer.

Considered to be mystery novel and Christie’s magnum opus, And Then There Were None – originally published in 1939 – is also her best-selling novel. To date, more than 100 million copies have been sold worldwide. It is one of the best-selling novels of all time.

In 1943, Christie wrote the stage version of And Then There Were None. Responding to the mood of the times – this was during World War II – she changed the ending, making it more positive and upbeat. The play was a smash hit in the West End in London and later on Broadway in New York City.

“The version we’re doing at HFC is the ending Agatha wrote for the stage version,” said Bremer.

And Then There Were None has been adapted numerous times in different media: graphic novels, video games, board games, radio, television, and film. The most recent adaptation was the BBC’s 2015 mini-series of the same name starring Charles Dance (Game of Thrones), Sam Neill (Jurassic Park), and Miranda Richardson (The Hours).

Tickets are $15 for adults and $10 for students with a valid photo ID, HFC employees, and senior citizens. For questions or further information, contact Bremer at ctbremer@hfcc.edu.