Notice: This article is more than one year old and is part of the Henry Ford College news archive. Information in the article may be outdated. For the most current news and information about Henry Ford College, please visit hfcc.edu/news, or contact communications@hfcc.edu.
Release Date:
Tuesday, July 3, 2018

An advocate waiting to happen 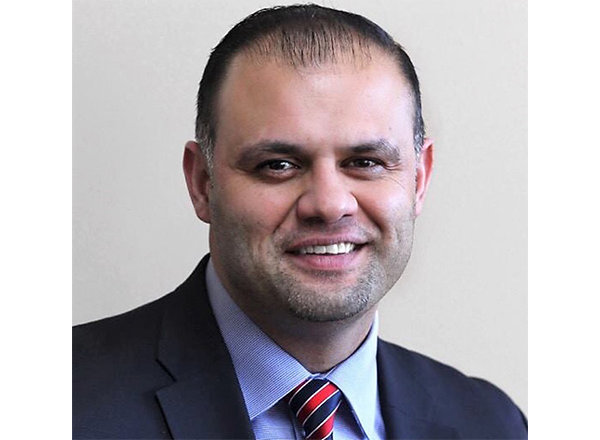 When he was a student at HFC, Ali K. Hammoud – who recently was appointed magistrate in Dearborn’s 19th District Court – didn’t know what field he wanted to pursue, and changed his major several times. After transferring to Wayne State University, he settled on education, but a conversation with former U.S. Representative John Dingell set him on the path to becoming an attorney.

“I wanted to teach high school,” recalled Hammoud. “One of the requirements for obtaining a teaching degree (at Wayne State) was a political science course. That course was a vital point in my career switch. As part of the course, I interned for then-Congressman Dingell (who served 30 terms in the House, retiring in 2015) and on the last day of my internship, he and I had a deep conversation about my future career plans over lunch. I told him I planned to become a teacher. Surprised, he explained, ‘Ali, teaching is an honorable profession, but after working with you, I see an attorney -- an advocate -- waiting to happen.’”

Hammoud changed his mind. And his major.

“Becoming an attorney wasn’t the plan,” he said. “(Dingell) was the first mentor who encouraged me to consider that route. He inspired my inner advocate, and I ended up changing my major to political science. I haven’t looked back since.”

So many educational possibilities

Hammoud looks back fondly on his time at HFC, which he called a “remarkable college” that is “extremely diverse.” It was the uniquely diverse environment and the affordable tuition that attracted him to HFC.

“It provides you an invaluable avenue to many different opportunities. I remember changing my major a couple times -- not because I couldn’t get through a subject, but because the College introduced me to so many different subjects that I didn’t think I could major in. It was a very rewarding experience, and I was fortunate to have met a lot of people I’m still friends with,” he said. “The tuition was fair and affordable for someone from modest means. HFC faculty and staff provided the perfect opportunity and atmosphere to excel.”

Ali is married to Fadwa Hammoud, an assistant prosecuting attorney for the Wayne County Prosecutor’s Office and a member of the HFC Board of Trustees. They have two children, ages 4 and 2.

Magistrate of the 19th District Court

Hammoud has been a practicing attorney for nine years. In June, he was appointed magistrate of the 19th District Court, nominated by Judge Eugene L. Hunt.

“I’ve tried countless cases in Dearborn and litigated one case all the way to Michigan’s Supreme Court. I handle a variety of felony and misdemeanor cases – murder, armed robbery, drug trafficking and civil infractions – throughout Wayne County, but the 19th District Court has always been home,” he said. “Judge Hunt called me (in early 2018) and said, ‘Ali, you’re a veteran of this court and possess the integrity, qualifications, and experience to serve your the city as magistrate. It would be an honor if you would accept an appointment to fill that role.’ I’ve known Judge Hunt since he was a practicing defense attorney. I’ve looked up to him and valued his opinion and judgement since. I was obviously thrilled and humbled to be considered for this nomination, and even more excited for the opportunity to serve my community in this new capacity.”

In his role as magistrate, Hammoud will preside over cases such as traffic violations, landlord/tenant disputes, small claims court, minor criminal matters, and other misdemeanors. District court magistrates exercise the jurisdiction expressly provided by law and authorized by the chief judge of the district or division.

Judge Mariam Bazzi of the Wayne County Circuit Court, who is a former HFC Board Member, champions Hammoud’s appointment.

“I have known Ali Hammoud for many years,” said Bazzi. “I have no doubt his legal experience, dedication to the law, demeanor, and temperament will be a welcome and positive addition to the 19th District Court in his new role as magistrate.”

The rewards of telling the story: innocent until proven guilty

As magistrate, Hammoud will be able to continue in his private law practice, as long as his private work remains outside the 19th District Court. He and Kassem M. Dakhlallah, a Fordson classmate, founded Hammoud, Dakhlallah & Associates, PLLC in Dearborn in 2015. Hammoud specializes in criminal defense, while his partner specializes in commercial business litigation. Jointly, they handle federal white collar criminal defense.

Hammoud spoke about his early desire to go into criminal law. During his time at Cooley, he excelled and developed a passion for the subject. It came naturally to him. He’s had experience in criminal law on both sides of the aisle – as a defense attorney and as a prosecutor, having interned for the Wayne County Prosecutor’s Office.

“It’s very rewarding to help people who find themselves in the criminal justice system. As a defense attorney, I’m an advocate for the accused, charged with protecting my clients’ interests and making sure the law works as it should. As part of my advocacy, I try to ensure that no matter the circumstance, my clients can continue to be productive members of society,” he explained. “I get to tell their story, and that’s what keeps me up at night. When somebody is charged with a crime, the law presumes they are innocent until proven guilty. I’ve represented many innocent people who unjustly found themselves in the system. It’s really rewarding to fight on their behalf and later get rewarded when a judge or jury comes back and says, ‘Not guilty.’

"I’m proud of my legal work; I’d like to believe it speaks for itself.”