Notice: This article is more than one year old and is part of the Henry Ford College news archive. Information in the article may be outdated. For the most current news and information about Henry Ford College, please visit hfcc.edu/news, or contact communications@hfcc.edu.
Release Date:
Wednesday, October 31, 2018 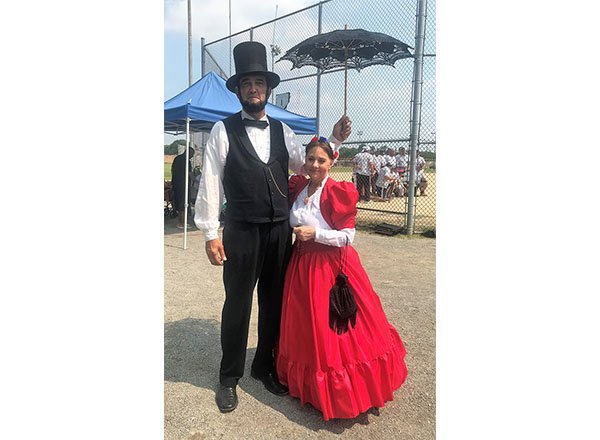 Reenacting the persona of Abraham Lincoln has made a difference in Ron Carley's life.

“It’s a great blessing to be able to portray such a great man,” said Carley, of Westland. “It’s made me a better human being.”

When he first donned the 16th President’s trademark attire – stovepipe hat, black suit, and bowtie that hearken back to the 1860s – for Halloween in 2012, it was supposed to be a one-time thing.

“At first, it was just a lark,” admitted Carley. “I saw myself in the mirror and thought, ‘My gosh, I really do look like Lincoln!’ I dressed up as Lincoln again the next Halloween. A friend suggested that I should do it more than once a year.”

And he has -- learning more about the man and the history in the process. Carley has appeared as Lincoln at the Henry Ford Museum in Dearborn, where the actual chair Lincoln sat in when he was assassinated is on display behind glass. Carley reenacted the Gettysburg Address on Veterans Day for Ford Motor Co. in Dearborn. He’s also spoken in classrooms, participated in parades, cosplayed as Lincoln at various comic-cons, and traveled to Springfield, IL and Gettysburg, PA.

In July, he threw out the first pitch – dressed in 19th-century period clothing in 90-degree heat, no less! – at the Celebrity Softball Tournament in Ferndale, where local celebrities play to raise money for the Boys and Girls Clubs of Oakland and Macomb Counties. He and his wife, Tina, who dressed up as Lincoln’s wife, Mary Todd, posed for photos with WDIV Local 4’s Jason Carr, boxing legend Tommy “The Hitman” Hearns, radio personality Big Al Muskavito, and Macomb County Executive Mark Hackell.

Last year, Carley's Lincoln made an appearance at HFC. He’s returning to the College this year:

Wednesday, Nov. 14, from 11:00 a.m. to noon in Room K-14 in the basement of the Reuther Liberal Arts Building (Bldg. K) on the main campus. The event is free and open to the public.

“It is amazing what Abraham Lincoln did and from where he came,” said Carley, who will detail Lincoln’s triumphs and tragedies, appearing in character as the Great Emancipator.

HFC history instructor Sam Plaza invited Carley for the past two years to speak at the College. Plaza met Carley and his wife during the Civil War Remembrance Days in 2017 at Greenfield Village in Dearborn. The couple was dressed as the 16th President and First Lady, walking the grounds.

“I was so amazed by how much he looked like Lincoln,” recalled Plaza. “We started talking, and I invited him in to speak. His presentation was very well received last year, so I invited him back. When he came, students stopped and took selfies with him. He was very accommodating and generous with his time.”

Carley has extensively studied Lincoln, educating himself on every aspect of his life.

“It’s one thing to look like him, but it’s another thing to act like him,” said Carley. “You have to know about his family, his friends, his opponents, the key players during the Civil War – everything about that era. I’m still learning. In fact, not a day goes by that I don’t learn more about Lincoln.”

Abraham Lincoln was born in one-room log cabin in Kentucky on Feb. 12, 1809. He came from a little-educated family of scant means. Yet he managed to rise to great heights, becoming the 16th President of the United States.

Lincoln had almost no formal education. He even dropped out of grade school. His father, Thomas Lincoln, wanted his son to become a farmer and frontiersman like himself. Lincoln disliked the hardscrabble frontier life, despite being strong, athletic, and extraordinarily tall for his time, at 6 foot 4. Lincoln's lack of passion for frontier life strained relations between him and his father.

Mostly self-taught, Lincoln was an avid reader, having read and reread – most notably – the Bible, the complete works of William Shakespeare, and Aesop’s Fables. A self-educated lawyer, he earned his law license in 1839 and went into private practice in Springfield, IL.

At age 23, Lincoln bought a general store in New Salem, IL in 1832. The business wasn’t successful, and he went bankrupt. It took him years to pay off his debts.

He lost his first love, Ann Rutledge, when she died of typhoid fever in 1835. Afterward, he suffered a nervous breakdown. Lincoln suffered from depressive tendencies for most of his life.

In 1842, Lincoln married Mary Todd. Together, they had four sons: Robert, Edward, Willie, and Tad. Tragedy was never far from the family, as Edward died when he was 3, and Willie died when he was 11.

In 1860, Lincoln was elected president of the U.S. by less than 40 percent of the popular vote. He gave his inaugural address knowing that Army sharpshooters were guarding him from possible Confederate sympathizers. He was constantly under fire by Republicans – his own party – and Democrats alike while in office, and was despised by half the nation. Plaza says this made him a very divisive leader.

Lincoln’s presidency further polarized the American South on the issue of slavery and states’ rights. Many southern states seceded from the Union in the wake of his election, leading to the beginning of the Civil War, which killed more Americans than any other war in history.

Still, Lincoln worked tirelessly to pass the 13th Amendment to the U.S. Constitution, which formally outlawed slavery and helped lead to the end of the war. The Confederate surrender did not end the bloodshed. On April 14, 1865, Lincoln was fatally shot by John Wilkes Booth at Ford's Theatre in Washington, DC.

“Lincoln never gave up,” said Carley. “He was a man who learned from his mistakes and had a drive that allowed him to overcome nearly insurmountable odds.”

Yet despite all Lincoln’s shortcomings and all of his failures, countless people have been inspired by him. To this day, Lincoln is considered by scholars, historians, and the public to be one of the greatest presidents the nation has ever known. With the exception of Jesus Christ, it's possible that no other historical figure has been written about as much as Lincoln. He is the subject of more than 18,000 books and counting. The Lincoln Memorial and Mount Rushmore pay tribute to him in granite.

Lincoln has been portrayed by numerous actors in popular culture, including Dennis Weaver (Gunsmoke) in The Great Man’s Whiskers, Oscar winner Gregory Peck (To Kill a Mockingbird) in The Blue and the Gray, Emmy winner/Oscar nominee Hal Holbrook (All the President’s Men) in 1976’s Lincoln and North and South, Oscar nominee Sam Waterson (Law & Order) in 1988’s Lincoln and The Civil War, and Oscar winner Daniel Day-Lewis (There Will Be Blood) in 2012’s Lincoln.

“Lincoln will go down as one of the greatest presidents in history. He epitomizes the American dream: He came from nothing to eventually become the President of the United States. Despite his personal demons, despite everything that was thrown at him – and these were significant traumas – Lincoln managed to carry on with his important work. Such resilience and strength of character are truly awe-inspiring,” said Plaza. “His greatness was evident through his speeches, most notably the Gettysburg Address. To me, he's one of the top three greatest presidents in history, on par with George Washington and Franklin D. Roosevelt.”

Some little-known facts about Lincoln:
• He was the first successful Republican candidate to become president
• He was the first person from outside the original 13 colonies to become president
• He served as his own campaign manager when running for president
• He campaigned for Zachary Taylor, the 12th President of the United States, in Jackson, MI – his only appearance in Michigan
• He liked to joke and had a dry sense of humor
• He was an accomplished wrestler, and while rural record-keeping wasn't up to 21st century standards, there is only 1 known loss among all his wrestling matches
• He was instrumental in making Springfield the capital city of Illinois

“Lincoln is rated as the No. 2 president in American history, second only to George Washington,” said Carley. “In fact, Washington was Lincoln’s hero and his favorite president. Lincoln was self-educated, a common man who grew out of nothing. He’s quite a study.”

Join us to see the 2018 version of Abraham Lincoln live on campus November 14, 2018! The event is free and open to the public.