Notice: This article is more than one year old and is part of the Henry Ford College news archive. Information in the article may be outdated. For the most current news and information about Henry Ford College, please visit hfcc.edu/news, or contact communications@hfcc.edu.
Release Date:
Monday, June 19, 2017 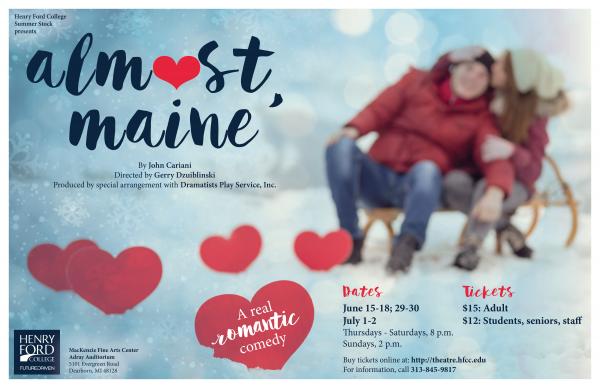 The HFC Theatre Arts Dept. presents “Almost, Maine,” which will run from June 15-July 2 in the Adray Auditorium, located in the Grant U. MacKenzie Fine Arts Center (Building F on the main campus). More at https://www.hfcc.edu/events/3530.

HFC's Summer Stock is an unique blend of professional actors, alumnae, alumni, and current students designed to give you a high quality summer theatre experience.

The fully-staged production will be done in a “black box” format, where the audience is seated in close proximity to the actors, according to Gerard Dzuiblinski, HFC adjunct theatre instructor, technical director and resident scenic designer.

Written by John Cariani, a Tony-nominated playwright and actor best known for his role as Julian Beck from 2002-07 on the long-running TV series “Law & Order,” “Almost, Maine” is comprised of nine short plays that explore love and loss in a remote, mythical almost-town called Almost, Maine. It premiered at the Portland Stage Company in Portland, Maine, in 2004, where it broke box office records and received critical acclaim.

“’Almost, Maine’ is a contemporary romantic comedy about this fictional small town’s people and their loves as they discover each other and themselves,” said Dzuiblinski.

To purchase tickets, go to http://theatre.hfcc.edu. For questions or further information about “Almost, Maine,” contact Dzuiblinski at 313-845-9817 or gadzuiblinski@hfcc.edu.

FOR MORE INFO ON THIS GREAT SHOW--CLICK HERE.

HFC Theatre prides itself on offering a diverse selection of arts entertainment for the residents of Michigan. Not all productions may appeal to or be appropriate for every person or for all ages. Therefore, patrons are encouraged to familiarize themselves with the shows we offer in order to make informed decisions prior to purchasing tickets.

EDUCATIONAL VALUE A touching and very human look at romantic love: its beginnings, endings, conflicts, joys and sorrows. It lets us know we are not alone in the difficult search for true and lasting romantic love.

POSITIVE MESSAGES AND ROLE MODELS Despite setbacks, people keep trying to establish and maintain relationships. People treat each other with dignity and respect, even when they disagree.

VIOLENCE AND SCARINESS There is no physical violence. There are no frightening scenes.

SEXUAL CONTENT There are several kisses. In one scene, both characters are in their long underwear, they have just come in from snowmobiling, physical contact is implied, but not shown.

LANGUAGE “Dammit” and “Jeezum crow” are the strongest expletives. A mention is made of an unnamed activity taking “all night”.

DRINKING, DRUGS AND SMOKING. One scene in a bar has a character drinking a beer. He is not drunk. A few other characters mention going out to have a beer. There is no smoking. There is no talk of, or use of other drugs.

Act and Scene Breakdown Place: Various locales in Almost, Maine, small town in Northern Maine that doesn’t quite exist. Time: The present. Everything takes place at nine o’clock on a cold, clear, moonless, slightly surreal Friday night in the middle of the deepest part of a Northern Maine winter.

Prologue Act One Scene 1: Her Heart Scene 2: Sad and Glad Scene 3: This Hurts Scene 4: Getting it Back Intermission (15 minutes)