Notice: This article is more than one year old and is part of the Henry Ford College news archive. Information in the article may be outdated. For the most current news and information about Henry Ford College, please visit hfcc.edu/news, or contact communications@hfcc.edu.
Release Date:
Wednesday, July 6, 2016 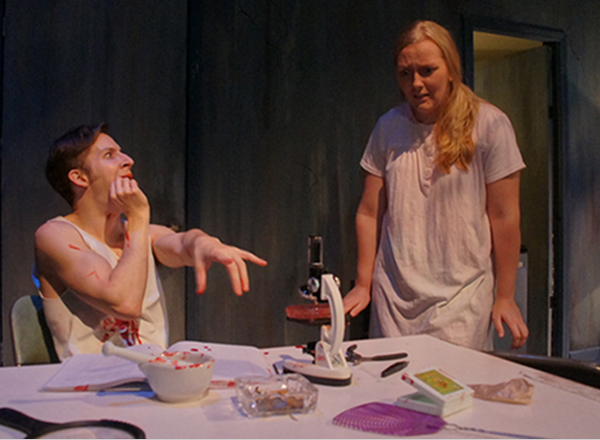 HFC students Zach Ross and Samantha Kenbeek in a scene from "Bug."

Based on their performances in Pulitzer-Prize winner Tracy Letts’s play “Bug,” Ross and Kenbeek will compete at the regional level in January 2017. If successful, they will showcase their talents at the national festival in Washington, D.C “Bug” recently finished its run at HFC and was directed by Dr. George Popovich, HFC director of Theatre.

Ross, of Dearborn, received the nomination for his portrayal of Peter Evans, the lead character in “Bug.” This fall, he will begin studying at the highly competitive acting program of Oakland University. This is Ross’ second consecutive nomination for an Irene Ryan Acting Scholarship. He was nominated for his portrayal of C.C. Showers in HFC’s production of “The Diviners” this past spring.

“It’s pretty surreal. It’s crazy that I got the roles in both plays at the last minute and it’s a prestigious achievement that I’ve nominated twice in a row now. I’m ecstatic. I didn’t expect 2016 to have this big of a turnout, but I can thank HFC for making that happen,” said Ross.

It is quite rare for a student to earn nominations for two consecutive Irene Ryan Acting Scholarships, according to Popovich.

“One nomination is good. Two nominations in a row is very good. Zach is a phenomenally gifted actor,” said Popovich.

Kenbeek, of Dearborn Heights, received the nomination for her portrayal of Agnes in “Bug.” A 2012 alumna of Annapolis High School in Dearborn Heights, Kenbeek has attended HFC and Wayne State University. She has been active in community theater since age 13.

“I was so excited and happy to hear that we were nominated. I didn’t think we’d get nominated but we worked really hard. I’m very happy our hard work has paid off. I can’t wait to see where it leads,” said Kenbeek.

“Samantha is honest and believable as an actress, and she demonstrates that emotional truth in ‘Bug,’ which is essential to the part of Agnes,” said Popovich.

“Bug” is a psychological horror story nominated for three Drama Desk Awards. The play debuted in 1996 in England. Letts adapted “Bug” into a 2006 feature film starring Michael Shannon (“Man of Steel”) and Ashley Judd (“High Crimes”). The majority of “Bug” occurs in a seedy hotel room where Agnes – a lonely waitress addicted to cocaine – lives. Agnes is on the run from her violent ex-husband Jerry, who was just released from prison. One night, Agnes’ friend R.C. introduces her to Peter, a Gulf War veteran who may or may not be AWOL.

Agnes becomes involved with Peter, who is paranoid about the war in Iraq, UFOs, the Oklahoma City bombing, cult suicides and the American government conducting secret experiments on soldiers. To make matters worse, there’s a hidden bug infestation in her hotel room that has both Agnes and Peter dealing with scathing welts and festering sores, which Peter believes is the result of experiments conducted on him during his stay at an army hospital.

Their fears soon escalate into the realm of paranoia, conspiracy theories and twisted psychological motives. In fact, Peter eventually draws Agnes into his paranoid delusions. From there, the play chronicles her slow descent into madness under Peter’s influence.

“Agnes is the character of a lifetime. The range of emotions and her character changes throughout the course of the play are challenging and thought-provoking,” said Kenbeek.

“HFC Theater is proving itself to be an artistic risk-taker with productions like ‘Bug.’ Most productions of ‘Bug’ are done by professional theaters, not colleges. ‘Bug’ is one of the most-difficult-to-produce plays ever written,” said Ross.

In May, Joshua Neilson, of Inkster, also earned a nomination for an Irene Ryan Scholarship Audition for his portrayal of Buddy Layman in “The Diviners,” alongside Ross.

When she died in 1973, Ryan had no surviving relatives and willed her estate of more than $1 million to start the Irene Ryan Foundation, which awards scholarships to aspiring actors who participate in the KCACTF. This program provides “recognition, honor, and financial assistance to outstanding student performers wishing to pursue further education.”

The KCACTF has honored HFC previously. The College’s 2004 production of “The Tempest” was a regional winner and travelled to the University of Illinois. HFC’s productions of “One Flew Over the Cuckoo’s Nest,” “Ruined,” “Macbeth,” and “The Skriker” have also earned honors by the KCACTF.

“We have an extremely high talent level presently at HFC. The KCACTF is the Academy Awards of college theater. It has all levels of colleges competing against each other. We are in Region III of the Festival which includes all colleges and universities in Illinois, Indiana, Michigan and Wisconsin. So we are competing against Northwestern University, the University of Michigan (U-M) and many more famous and prestigious schools. These schools take the KCACTF seriously and devote thousands of dollars to winning,” said Popovich.