Notice: This article is more than one year old and is part of the Henry Ford College news archive. Information in the article may be outdated. For the most current news and information about Henry Ford College, please visit hfcc.edu/news, or contact communications@hfcc.edu.
Release Date:
Thursday, July 16, 2015

HFC Presents “A Raisin In The Sun” Throughout August 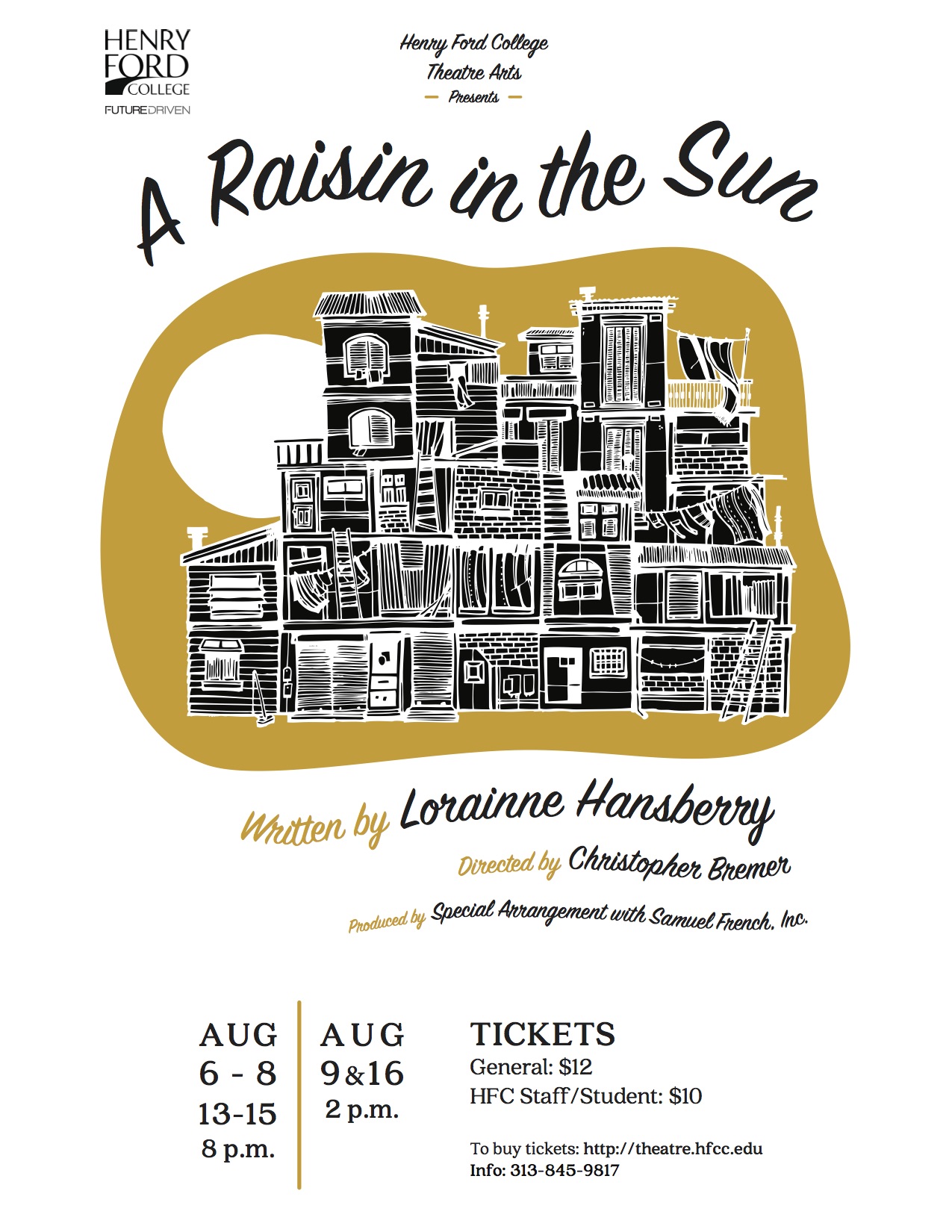 HFC will present Lorraine Hansberry’s “A Raisin in the Sun,” beginning Thursday, Aug. 6, at 8 p.m. in the Adray Auditorium, located in the MacKenzie Fine Arts Center on the main campus. The performances for “Raisin” are as follows:

“Raisin” follows the story of the Younger family, an African-American family living in poverty in a dilapidated two-bedroom apartment on the South Side of Chicago. The patriarch, Walter, barely makes ends meet as a limo driver. His wife, Ruth, is content with their lot in life. However, Walter is not; he wants to make a better life for his family – which includes son Travis, mother Lena and sister Beneatha – outside of the Windy City. Walter’s desire to become wealthy leads to conflicts with his family, particularly his mother who received a $10,000 life insurance check.

Debuting on the stage in 1959 at the Ethel Barrymore Theatre on Broadway in New York City, “Raisin” was a watershed moment in American theater. It wasn’t destined for success—Hansberry had difficulty finding financial backing for the play at a time when theater audiences were predominantly white, among other issues.

However, “Raisin” was an immediate success, making it the first-ever Broadway play written by an African-American woman. What makes Hansberry’s writing remarkable is not only her accuracy in capturing the racial dynamics of her time, but her foresight in predicting the direction black culture would take in subsequent years.

The original Broadway cast consisted most prominently of Oscar winner Sidney Poitier (“Lillies of the Field”), Oscar nominee Ruby Dee (“American Gangster”) and Oscar winner Louis Gossett, Jr. (“An Officer and a Gentlemen”). In fact, the original Broadway cast reunited and starred in the 1961 movie adaptation. In 1989, another adaptation was made for television starring Danny Glover of the “Lethal Weapon” movie franchise, which was nominated for three Emmy Awards.

“Raisin” is directed by HFC faculty member Christopher Bremer. In 2005, he earned selection as one of the five best directors in metro Detroit by the Detroit Free Press. He has earned nominations for best director by the Free Press, The Oakland Press and Between the Lines in 2005, 2006, 2007 and 2010. He has directed shows for HFC; the Jewish Ensemble Theatre (JET) in West Bloomfield, Mich. (where he serves as the executive director); Meadow Brook Theatre in Rochester Hills, Mich.; University of Detroit Mercy (UDM); as well as community theatres throughout the Metro Detroit area. He has also performed in Italy, Greece, and 44 states in the U.S.

Tickets for HFC’s production of “A Raisin in the Sun” are $12 for the general public and $10 for HFC faculty/staff and students. Tickets are available online at http://theatre.hfcc.edu. For further information, call 313-845-9817.