Notice: This article is more than one year old and is part of the Henry Ford College news archive. Information in the article may be outdated. For the most current news and information about Henry Ford College, please visit hfcc.edu/news, or contact communications@hfcc.edu.
Release Date:
Monday, July 27, 2015 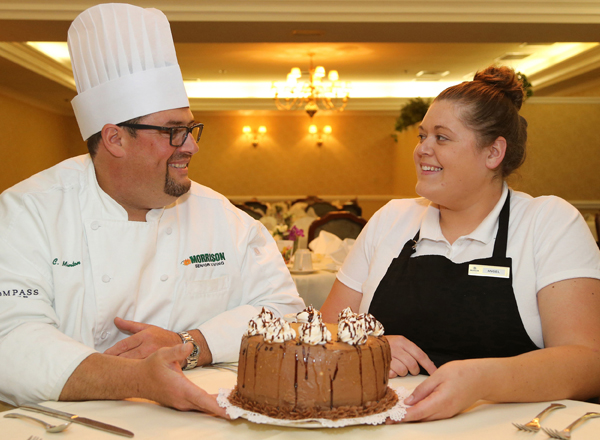 “I’ve always loved the creativity of baking, which is why I wanted to pursue a career as a pastry chef,” said Hagen, of Wyandotte, who graduated from HFC in 2014 with an associate degree in Culinary Arts/Hotel-Restaurant Management.

Hagen has been cooking since age 6. She got her start cooking professionally for Norwegian Cruise Lines (NCL) in 2007, making little cakes. From there, she’s worked for Olga’s Kitchen, Comerica Park, Motel 6 and the Marriott Hotel either as a cook or in a supervisory capacity.

“I learned how to do a lot of different things on the cruise ship and was amazed by all the artistic creations the chefs prepared,” said Hagen.

Hagen has been the head baker at Oakwood Common for more than two months. Executive Chef James “Jamie” Minton II is also new to Oakwood Common. A veteran of Operation: Desert Storm, Minton was a cook on the nuclear-powered submarine the U.S.S. Richard B. Russell. He’s also served as corporate executive chef in the automotive industry, including Ford Motor Co. and the General Motors Corp. (GM).

“Chef Jamie recognized my efforts at a recent culinary meeting. It’s nice to be appreciated after being here only two months,” said Hagen.

In her position, Hagen prepares a lot of “comfort desserts” for residents, such as homemade apple pie, cheesecake and rice pudding. She also prepares bread pudding, mini-parfaits and beautifully decorated tortes.

“I love the creativity of my job. I’ve found that residents welcome the old-fashioned pies, and homemade cheesecake is among their favorites,” she said.

“I learned so much. Chef Jablonski was probably the best teacher I ever had. Every week we worked on something different – torts, mousse, pies, cakes, different kinds of freshly baked bread. Most of all, Chef Jablonski taught me how to be organized. Organization is the biggest thing. If you’re organized, then you’re never behind,” said Hagen.

“Angel was a great asset to the Culinary Arts Dept. while she was at HFC. She showed a great interest in understanding the science of pastry-making and was able to apply that knowledge to move forward in her skill-sets. She showed that she was a self-motivated individual who wanted to learn more and be able reach her goals, not only in class but also in various competitions, such as the International Cake Exploration Society competition that was held here in Dearborn. I give Angel a great amount of credit for becoming head baker at Oakwood Commons and wish her the very best in her future endeavors,” said Jablonski.