Notice: This article is more than one year old and is part of the Henry Ford College news archive. Information in the article may be outdated. For the most current news and information about Henry Ford College, please visit hfcc.edu/news, or contact communications@hfcc.edu.
Release Date:
Thursday, May 22, 2014 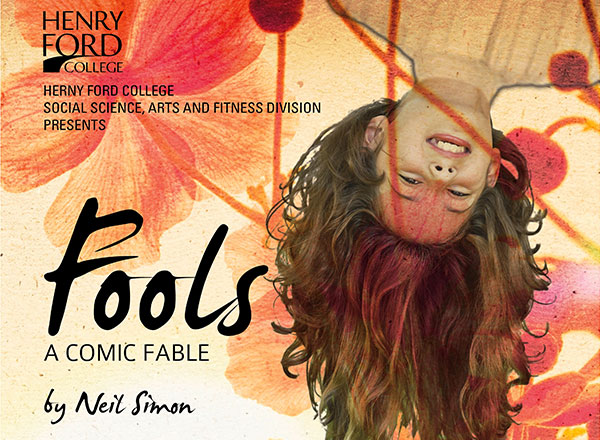 Performances will take place on the following dates:

Please note the two Sunday performances are at 2 p.m. as opposed to the 8 p.m. performances on Thursday, Friday and Saturday.

This fable focuses on Leon Tolchinsky, a young schoolteacher, who has found his dream job in a tiny Russian village. Upon arrival, he discovers the entire town has been under a spell of stupidity for 200 years. This spell was cast on them by Vladimir Yousekevitch after his son killed himself two centuries earlier.

Only Leon can break this curse. What he doesn’t know is that if he stays more than 24 hours and fails to free the village’s inhabitants, he too will fall victim to this spell and become stupid himself. To further complicate matters, he has fallen in love with a village girl named Sophia, regardless of the fact that she is so stupid she has only just learned to sit down.

“Fools” is directed by HFC Theater Arts Instructor/Technical Director Gerry Dzuiblinski, who recently won a Certificate of Merit from the Kennedy Center’s American College Theatre Festival (KCACTF) for his scenic design for HFC’s 2013 production of “Ruined.”

The play is open to the general public. Tickets are $10 ($8 for students with a valid photo ID).