Notice: This article is more than one year old and is part of the Henry Ford College news archive. Information in the article may be outdated. For the most current news and information about Henry Ford College, please visit hfcc.edu/news, or contact communications@hfcc.edu.
Release Date:
Tuesday, April 1, 2014 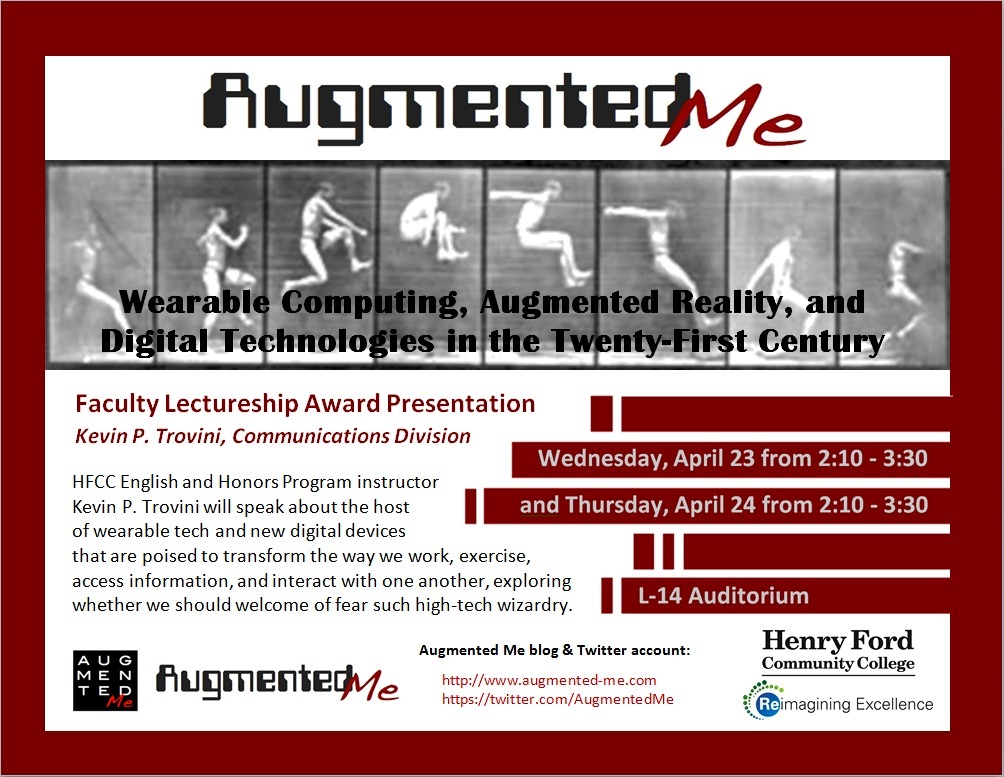 In his presentation, Trovini will address the host of new digital devices and wearable technologies that are poised to transform the way we work, exercise, access information, and interact with one another, exploring public reaction to such high-tech wizardry ranging from excitement to fear. These devices and wearable technologies include Google Glass, the Pebble smart-watch, the Fitbit One and Basis Band fitness and activity trackers, and the Narrative life-logging camera, among others.

Trovini will also discuss the deceptive allure of nostalgia, social attitudes ranging from technophilia to Luddism, biomedical advancements that enable the restoration of sight, hearing, or mobility to handicapped individuals. His presentation also includes discussion regarding the thrilling possibility of extending our sensory capabilities beyond the realm of the five senses (sight, hearing, touch, taste, smell).

Trovini earned his undergraduate degree from the University of Notre Dame, where he majored in English and computer applications. He has a graduate degree in English literature from Eastern Michigan University (EMU) in Ypsilanti. Prior to beginning his career as a college professor in 2004, Trovini worked briefly in industry.

His academic interests include topics found at the intersection of technology, culture, philosophy, and literature. He was the recipient of the 2010 Faculty Lectureship Award, where he delivered a presentation entitled “Visions of the Future: the Intersection and Cross-Influence of Literature, Technology, and Popular Culture.” In his blog, Trovini investigates the ways in which modern technologies are shifting our interpersonal relationships, the ways in which we interact with the world, and the very nature of our thoughts themselves.

This is presentation is free and open to the public. For further information, contact Trovini via email at ktrovini@hfcc.edu. Follow Trovini on his blog at www.augmented-me.com and on Twitter at https://twitter.com/AugmentedMe.