Notice: This article is more than one year old and is part of the Henry Ford College news archive. Information in the article may be outdated. For the most current news and information about Henry Ford College, please visit hfcc.edu/news, or contact communications@hfcc.edu.
Release Date:
Monday, May 6, 2013 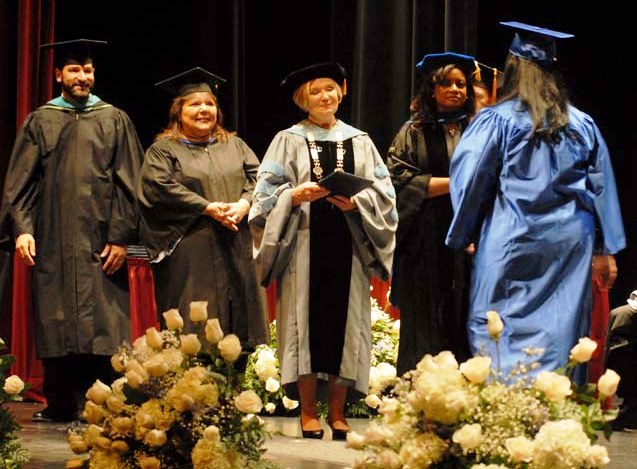 HFCC's 2013 Commencement Ceremony took place May 4 as the College celebrated the accomplishments of graduating students at the Ford Community and Performing Arts Center in Dearborn.

HFCC held a morning and an afternoon ceremony where thousands of family members and friends joined their graduates during the exercises. During the 2012-2013 academic year, approximately 1,900 students graduated from the College with a degree or a certificate.

Dr. Gail Mee, outgoing president of HFCC, said that the College “takes great pride in the annual commencement ceremony, which marks an important point in the academic careers and lives of all students. Many students must handle responsibilities as students, parents, and employees while working toward a degree. We’re very happy to celebrate their success and look forward to hearing of their contributions to society and industry in the coming years.”

Senator Hood III serves the River Rouge, Dearborn and Detroit areas with passion, vigor and commitment. During his career, he spent seven years on the assembly line at the Dearborn Engine Plant, and served as an alternate committeeman, working to ensure that worker rights were protected. His desire to address the larger problems within the community inspired him to run for the 11th District State House seat, representing Northwest Detroit and Northeast Dearborn. After his election to the House of Representatives, he served for three terms (six years). As chairman of the Joint Capital Outlay Committee, he negotiated bipartisan support of more than $200 million in state building projects. After leaving the House of Representatives, he became a project manager for Wayne County in the Department of Human Services. In 2010, Senator Hood continued his public service by running and winning election to the 3rd District State Senate seat, which includes Northwest Detroit, the City of River Rouge, and the City of Dearborn.

Representative Santana is the oldest of two children and the first college graduate in his family. He began his studies at HFCC and later attended Eastern Michigan University, where he graduated in 1999 with a bachelor’s degree in Political Science, and, in 2005, with a master’s degree in Public Administration. He has worked in the private sector as a transportation planner for an engineering firm and his experience in the civil engineering field has provided him the experience and understanding of transportation issues in Detroit and Southeast Michigan. His project involvement included the Detroit Intermodal Freight Terminal, Detroit River International Crossing, as well as many other transportation infrastructure projects. In addition, his community involvement prior to his 2010 election focused on cleaning up Detroit neighborhoods, serving as president of the Warrendale Community Organization and as a drill instructor for at-risk youth.

HFCC continues to represent an exceptional gateway to higher education for thousands of students each year. With more than 100 programs and dedicated faculty and staff, HFCC graduates have the opportunity to transition into careers or move on to four-year colleges and universities to complete their undergraduate degrees.