Henry Ford College (HFC) is a public community college in Dearborn, Michigan, USA, enrolling about 12,000 students per semester. The College offers more than 150 program options, including a bachelor's degree in Culinary Arts, 3+1 university degrees, associate degrees, and a variety of certificate and workforce development and training programs, as well as dual-enrollment options. HFC also specializes in customized workforce training programs and skilled-trades preparation for business and industry.

HFC offers classes on its two Dearborn campuses and other regional locations, and also offers many popular online and hybrid courses in a variety of academic programs. Non-credit and free course options are also available to qualifying participants.

We also offer a wealth of extra-curricular and co-curricular experiences, including women's and men's varsity and club sports, and nearly 40 student organizations.

HFC's Main Campus is on the southwest corner of Ford Road and Evergreen, north of and adjacent to the University of Michigan-Dearborn campus.

Henry Ford College was originally founded as Fordson Junior College, established by the Dearborn Fordson Public Schools Board of Education in 1938. For a brief period, it shared physical space with Fordson High School, operating functionally as "grades 13 and 14" for students in the district, before broadening its audience, its programs, and its mission as a standalone College. 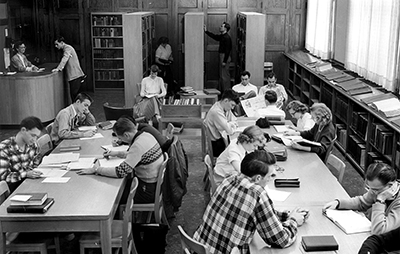 The Henry Ford College legacy (but not history) began 22 years before its founding, with the opening of a separate entity, the Henry Ford Trade School, in 1916. Founded by Henry Ford, the Trade School gave underprivileged young men the opportunity to earn a living while learning a trade that could support them and their families in the long term. It was the beginning of an educational model that had a long and substantive reach in American society.

The Henry Ford Trade School provided Ford Motor Company with trained draftsmen and technicians. The school started with just six students and one instructor. By 1931 there were 135 faculty members teaching 2,800 students. The school was kept up-to-date with modern shop equipment to help students gain the latest technical skills while studying a demanding trade-based curriculum.

During its 36 years, the Henry Ford Trade School graduated more than 8,000 students. In 1952, it liquidated its assets and closed. Its assets of $1.25 million were donated to the then Dearborn Junior College (DJC), which had been founded in 1938 as Fordson Junior College and was renamed Dearborn Junior College in 1946. (HISTORIC NOTE: The Trade School and the College were always separate entities. The two schools operated entirely independently from one another. The Trade School, which enrolled only young men, had a singular focus on training tradesmen for the Ford Motor Company. The College, which enrolled both women and men, focused on preparing learners for successful careers and lives in a broad variety of fields.) 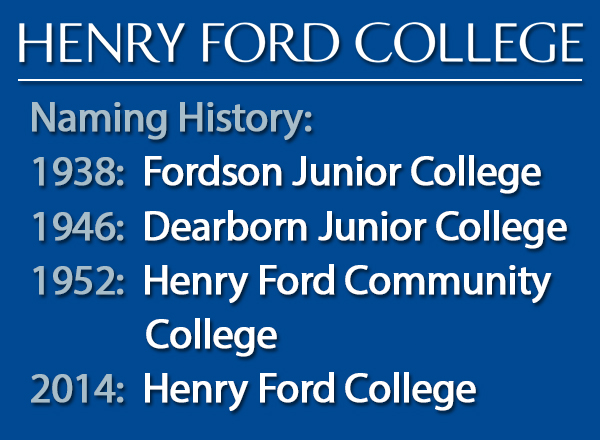 The College continued to grow in the ensuing decades, adding top-quality academic programs spanning the spectrum of the arts, sciences, technology, education, health, humanities, business, and of course, workforce and trades training.

In 2014, with the implementation of the College's first bachelor's degree in Culinary Arts, and in honor of the continued evolution of our academic and co-curricular offerings and mission, the College was renamed Henry Ford College.

We are, and will remain, a community college

Henry Ford College is firmly community-based, community-located, community-connected, and community-serving. We serve our community first and foremost, and we recognize the importance of the numerous community partnerships that help both the community and the College thrive together. We offer many programs and activities that are accessible and welcoming to all members of our community.

As part of our community mission, we also serve broader audiences throughout our state, region, and world. We are a Welcoming College, and we strive to be a model of a diverse, high-performing, inviting, and connected community that provides opportunities for all who walk through our doors.

As part of the Dearborn Fordson Public Schools at its founding, the College was originally led by a director or dean. The founding director was Kenneth MacLeod, who remained at the helm until 1943. Then, for two years during World War II, the College suspended operations, reopening in 1946 under a new dean, Fred Eshleman, after whom today's College library is named. In 1964, James McCann took over as dean. In the succeeding years, the Board was impressed with his leadership and upgraded his role. In 1966, the Board resolved, "That the title of Dean of the Henry Ford Community College be changed to President, effective immediately; and that Omer James McCann be so appointed to the position.”

Thus, James McCann became the first official president of the College. The tenure of each of the six College presidents is as follows: 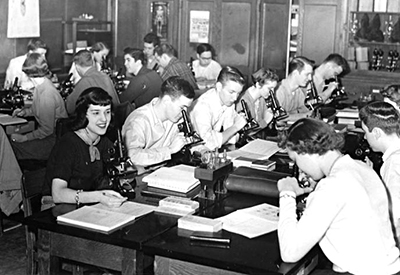 The HFC tagline, Future Driven, reflects the value of student-centered, community-focused education that prepares our graduates for the lives they aspire to lead. We believe it is critical to keep education affordable, while preparing our students for long-term professional and personal success.

Our in-district tuition is among the lowest in the state, and our overall tuition rates are a fraction of the costs at other colleges and universities. The reach of our student body is geographically broad, extending across southeast Michigan to students from countries around the world. Our academics are exceptional in breadth and in quality. While our academic offerings are much broader and more diverse than they were at our founding, we continue to believe that partnering with businesses to respond to their workforce needs ensures mutual success for them and for our graduates.

Our legacy now spans more than 80 years. We have our feet in the present and our mind toward the future, while tipping our hat toward a past that has led us, our community, and tens of thousands of alumni to successful learning, careers, and lives.

We are dedicated to providing a rigorous education, combined with the technical and technological acumen needed for students to thrive, no matter what their field of study. When it comes to decision time, we are your FutureDriven college. 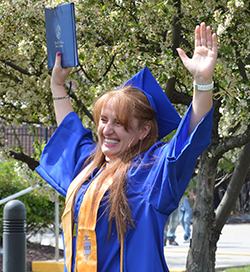