The College's sixth president, Mr. Kavalhuna is leading the way in creating affordable access to excellent higher education for all students. His mission is to promote an HFC education as a gateway to the middle class, and a gem in the Midwest. 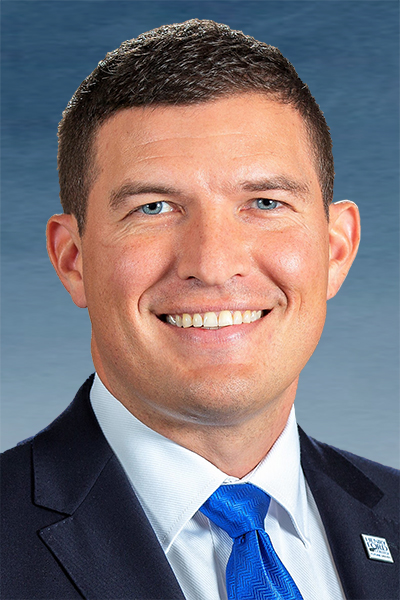 Russell A. Kavalhuna, J.D., joined Henry Ford College as the institution’s sixth president in July 2018. The role unites his passions for public service, education, and institutional leadership. As the son of an immigrant who attended a Michigan community college, he believes the community college model of education and service is the gateway to the American Dream.

Before becoming president at Henry Ford College, Mr. Kavalhuna was the Executive Director of Flight Operations at the Western Michigan University College of Aviation, the nation’s third-largest collegiate aviation program. He also taught a course in the curriculum.

Prior to his position at WMU, Mr. Kavalhuna was a federal prosecutor and a commercial airline captain.

In November 2021, Dearborn Mayor-Elect Abdullah Hammoud appointed Mr. Kavalhuna to his Mayoral Transition Team. This diverse 9-member, hand-selected team was to set the roadmap for Mayor Hammoud's new administration to deliver accountable, transparent government for all Dearborn residents, to offer guidance and recommendations about issues facing the city, and to help identify talented individuals who have a passion for public service.

In May 2020, Governor Gretchen Whitmer appointed Mr. Kavalhuna to the new statewide Workforce Development Board, with a mission of advancing the development and continuous improvement of the workforce development system in Michigan. The Board comprises the Governor and 20 executive leaders from across the state. They represent elected officials, business and industry, and higher education. President Kavalhuna is the sole community college president.

In January 2020, Mr. Kavalhuna was selected to join the inaugural cohort of the Aspen New Presidents Fellowship for Community College Excellence. The 25 college presidents selected through this highly competitive process represent a diverse set of leaders who strive to achieve significant improvements in student outcomes and greater equity in educational access and success. The Institute takes place in two segments -- one in summer 2020 and one in winter 2021. Presidents are expected to engage significantly in data collection, analysis, reading, and action planning as part of the Institute, with a goal of accelerating transformational change on behalf of students.

In 2018, Governor-elect Gretchen Whitmer’s transition team selected Mr. Kavalhuna for consultation on higher-education policy. He continues to offer the Governor’s office insight on the intersection of education, statewide-talent development, and workforce development.

Presidents William J. Clinton and George W. Bush selected Mr. Kavalhuna to serve in the second class of their Presidential Leadership Scholars program in 2016. Mr. Kavalhuna has served as an alumni mentor to subsequent classes in the leadership program, which serves as a catalyst for a diverse network of leaders brought together to collaborate and make a difference in the world as they learn about leadership through the lens of the presidential experiences of George W. Bush, Bill Clinton, George H.W. Bush, and Lyndon B. Johnson.

Mr. Kavalhuna served as a federal prosecutor for the U.S. Department of Justice in Grand Rapids, Michigan, where he managed more than 140 officers in a multi-year investigation and prosecution of 31 gang members. He was a senior lawyer for the Michigan Supreme Court, and he has taught at Western Michigan University Cooley Law School.

As a pilot, he served as first officer and captain for U.S. Airways Express for five years. He also held a leadership position in the Airline Pilots Association collective bargaining unit.

Mr. Kavalhuna earned his undergraduate degree in aviation science from Western Michigan University. He earned his juris doctor from WMU Cooley Law School. He finished third in his class and was selected by his classmates as the Valedictorian speaker.

His awards and honors include the Airline Transport Pilot Certificate, the highest civilian license; the ATF National Honor Award for Prosecution of Organized Crime; the Outstanding Achievement Award from the Holland Police Department; and being named as an “Up and Coming Lawyer” by Michigan Lawyers Weekly.

President Kavalhuna, his wife, Courtney, and their children are proud residents of Dearborn. 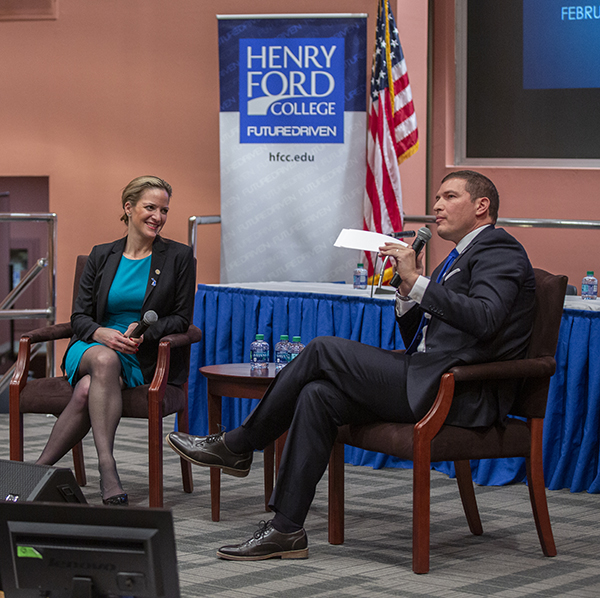 Secretary of State Jocelyn Benson and President Kavalhuna present information about voting in Michigan and the upcoming national Census at the Student Engagement Conference in Feb. 2020. 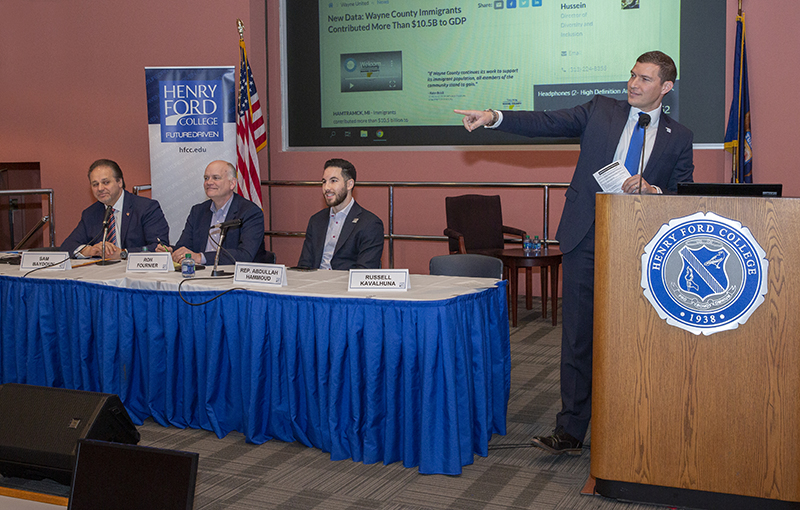 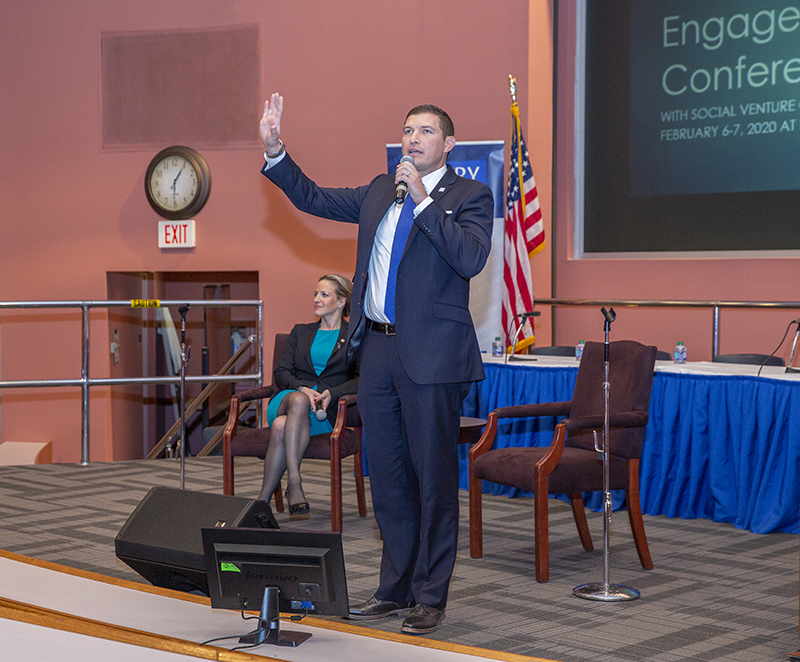 President Kavalhuna leads a discussion among students, asking for a show of hands on a question about public service. On stage with President Kavalhuna is Secretary of State Jocelyn Benson, who spoke to students as part of the 2020 Student Engagement Conference. 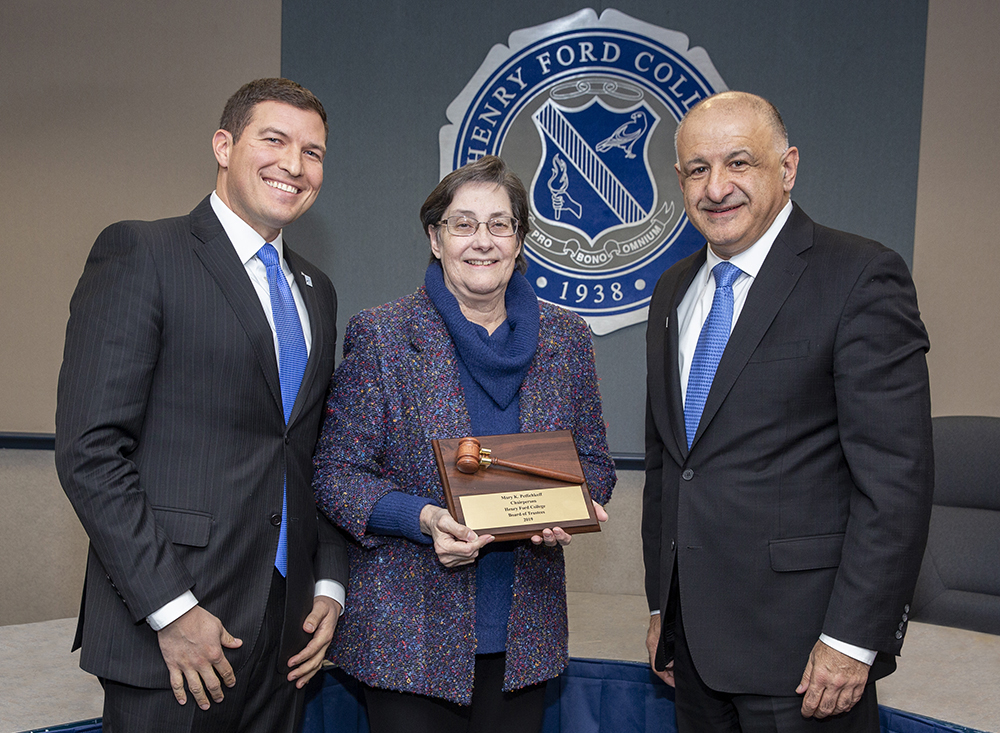 Passing of the Gavel: Incoming Board of Trustees Chair Hussein Berry (right) and President Kavalhuna present a gavel and plaque to outgoing (2019) Board Chair, Trustee Mary Petlichkoff. 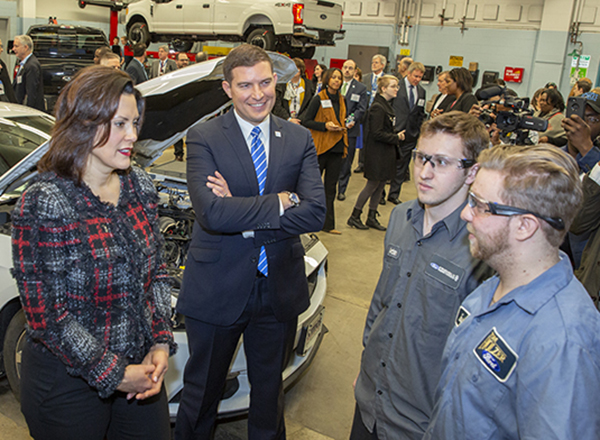 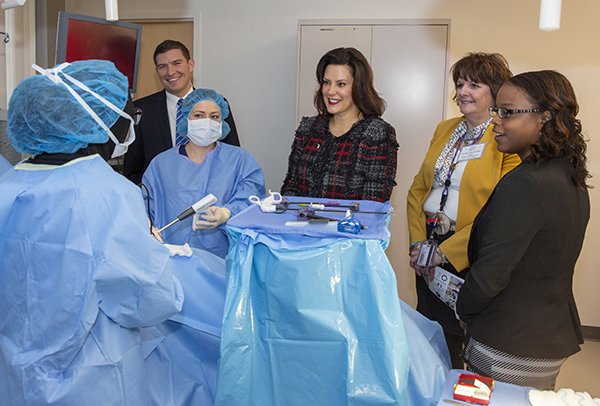 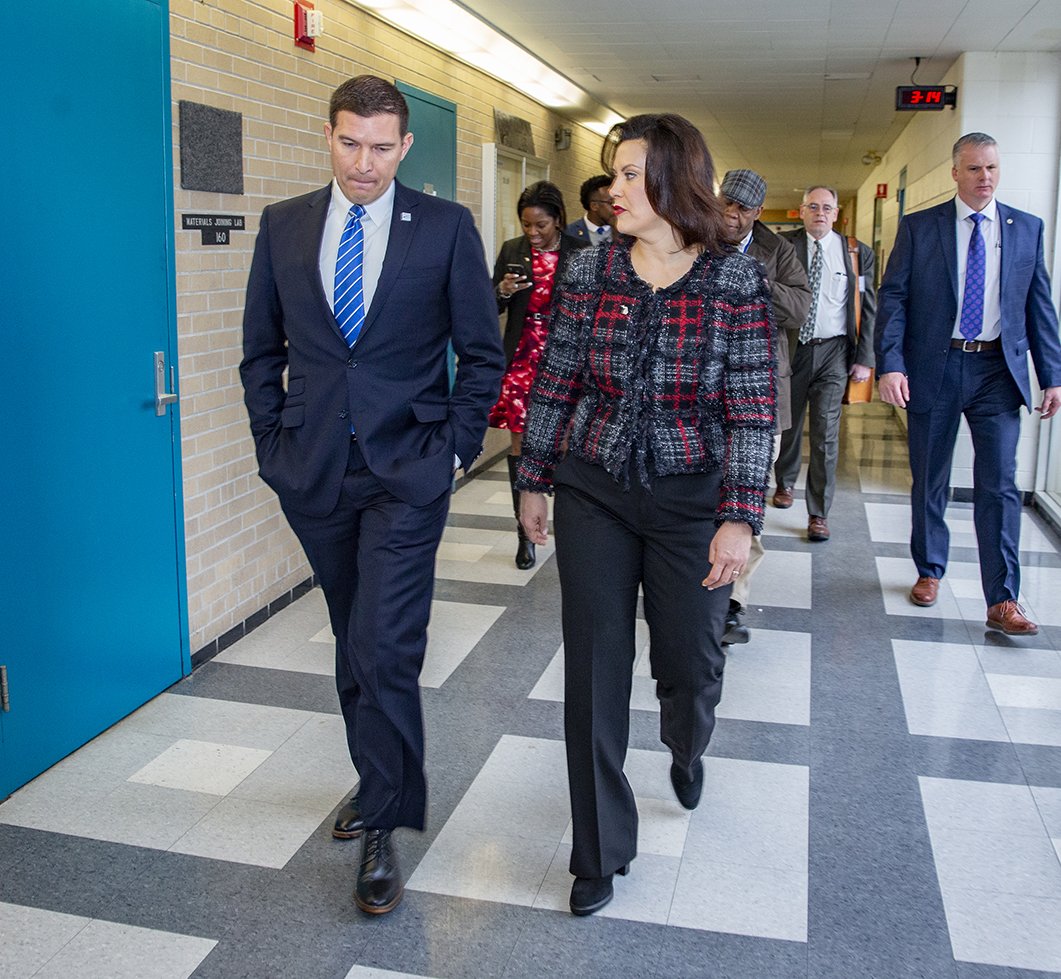 President Kavalhuna and Governor Whitmer talked about the future of trades and workforce programs during the Governor's March 2019 visit to campus. Lieutenant Governor Garlin Gilchrist and President Kavalhuna talk to a student during a robotics demonstration at HFC. 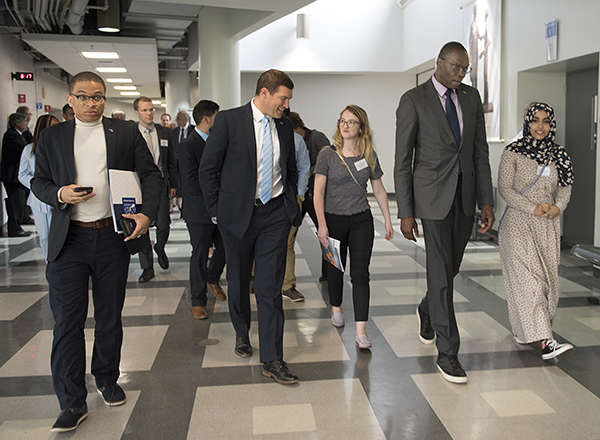 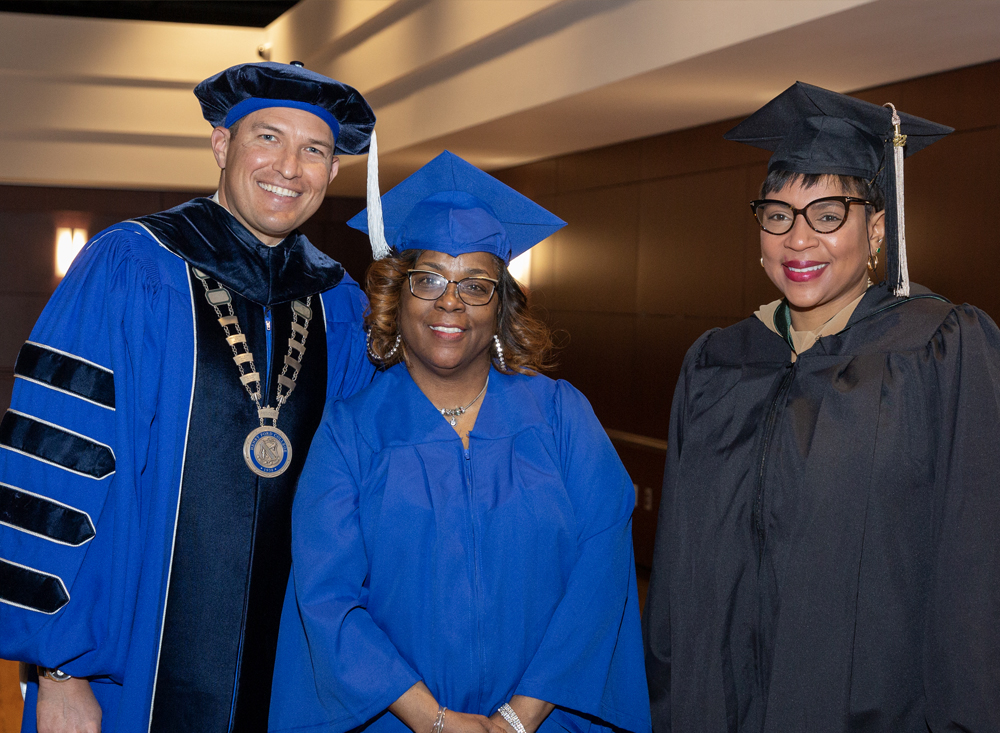 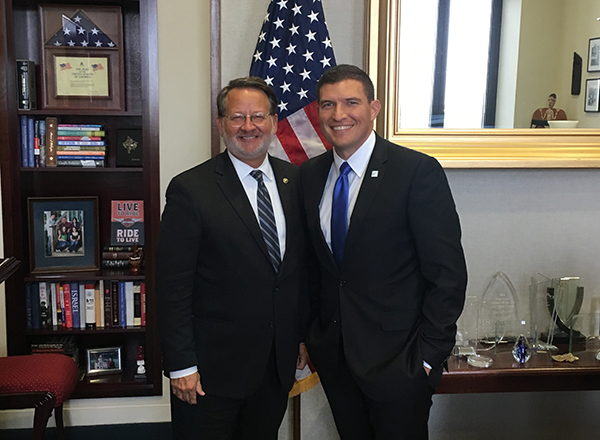 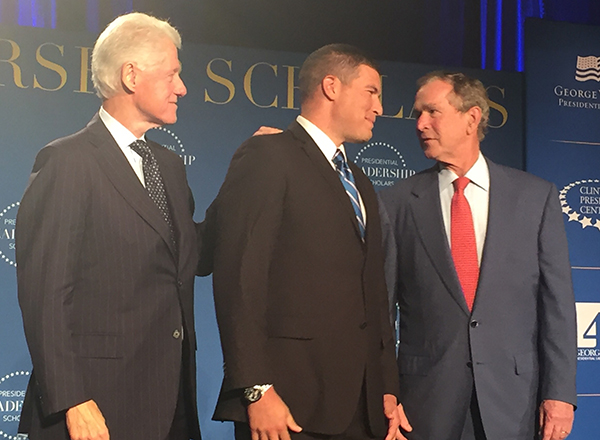 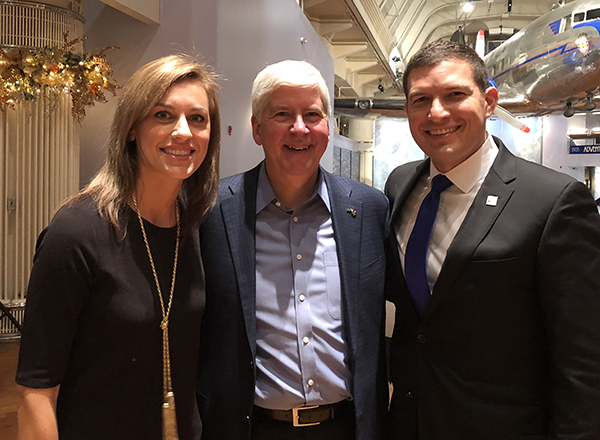 Russell Kavalhuna and Courtney Kavalhuna (fifth and sixth from left) with the cast of HFC's production of The Laramie Project. 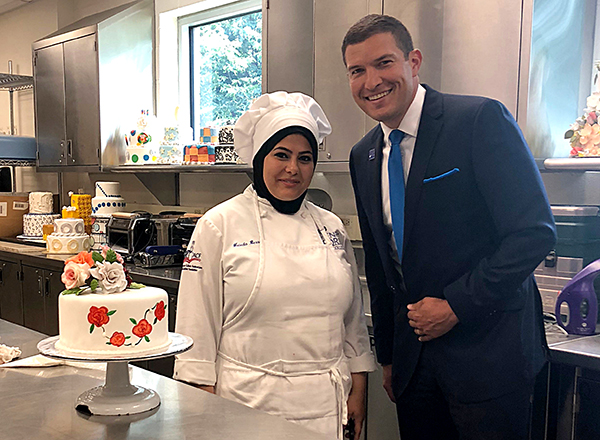 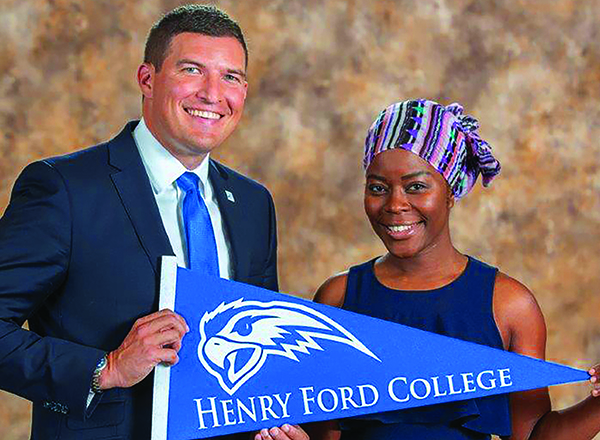 Russell Kavalhuna and a student show their HFC Hawks spirit. 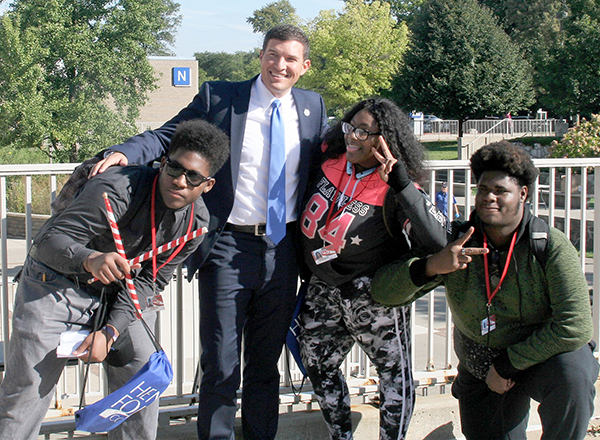 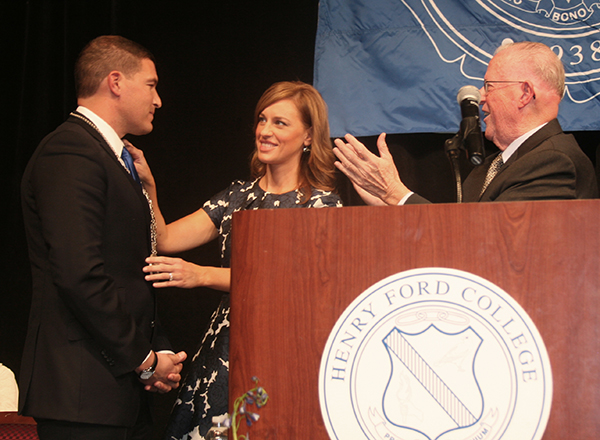 Courtney Kavalhuna (center) and Board of Trustees Chair Michael Meade (right) invest Russell Kavalhuna with the Presidential Medallion during his October 2018 Investiture. 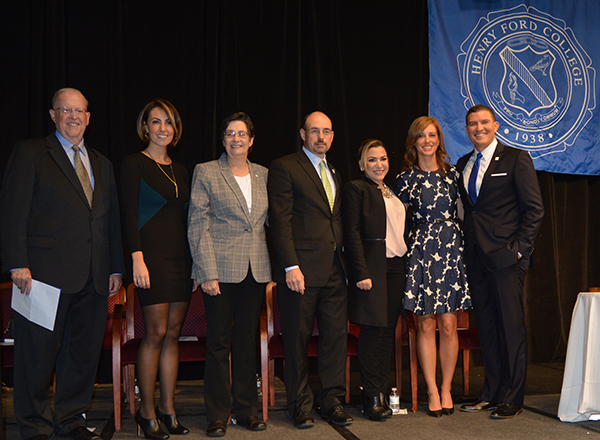 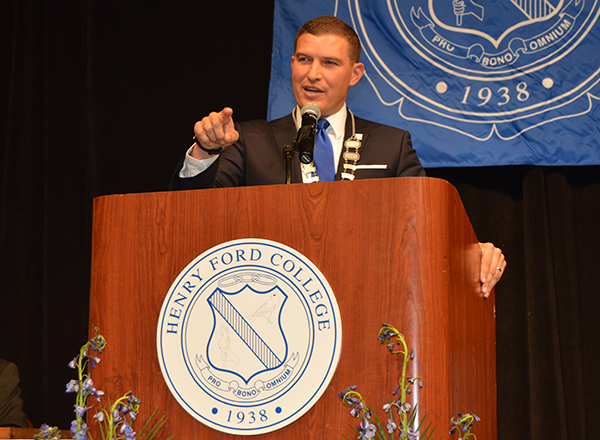