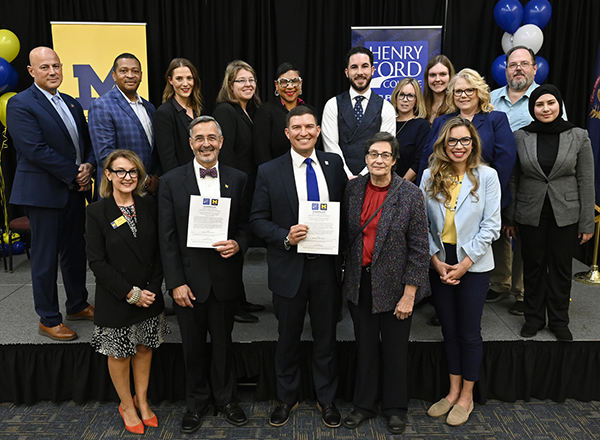 President Kavalhuna and Chancellor Grasso shared earlier in the day that both of them came from immigrant parents: Grasso's parents immigrated from Italy, and Kavalhuna's father immigrated from Brazil. Both found their way to the American Dream through access to excellent higher education. They spoke about the meaning of community and family through this kind of connection.

Baruah, Santana, and Hammoud spoke to the meaning of the program as an opportunity for the state's citizens, the future of industry and Michigan's competitiveness nationally and worldwide. Hammoud shared his story of being a 15-year-old student in a college class, and that this program would affect thousands of people like him.

Students’ top three transfer concerns will be addressed by this program

Citing the top three concerns of students about getting accepted, transferring credits, and affording tuition at their transfer university, HFC Honors student Alayna Kondraciuk said, “Knowing there is a program that can give you all three of these things, and guarantee the first two, is huge.” Kondraciuk added that she and her fellow students were “shocked and excited” when they heard about a program that could provide such a clear roadmap to their future success.

Other students shared similar excitement over the possibilities. Zena Sattar, a first-generation Arab American student, said the program would alleviate concerns about not knowing what to do, and is "amazing for us" as students who will be the future of Michigan's prosperity. Mark Robey, an Honors student who has come back to attend college after a lengthy career, spoke about his pride as a dad, looking at how the two institutions will serve students who will benefit because the two schools are "lighting a pathway" for those who need to see role models leading the way.

HFC President Russ Kavalhuna and UM-Dearborn Chancellor Domenico Grasso extolled their schools' long history of collaboration as well as the program's broad services and connections for students. They pointed out the measurable impact that innovative partnerships like this will have on the future of Michigan's economy. This is a return on the investment that Michigan citizens make in our excellent higher education institutions through their tax dollars and by sending their children and family members to our institutions.

"This is a big win for students, the economy, and the state. This is the future of higher education," said Kavalhuna.

Broad education, industry, and bi-partisan support for the program from the beginning

In addition to the speakers who shared their personal reflections, other dignitaries present at the October 24 launch event included emcee and UM-Dearborn Provost Gabriella Scarlatta, State Representative Tyrone Carter, Dearborn Heights Mayor Bill Bazzi, HFC Trustees Mary Petlichkoff and Irene Watts, and the Detroit Chamber VP of Education and Talent Greg Handel. Many members of the HFC and UM-Dearborn communities who helped build the Learn4ward program, as well as students, faculty, and staff from both institutions, also attended.

Others who could not attend the event sent their endorsements:

Michigan Governor Gretchen Whitmer:
“Today’s exciting collaboration to guarantee qualified Henry Ford College students admission to the University of Michigan-Dearborn will put more Michiganders on a path to pursue their potential and land a good-paying, high-skill job,” said Governor Whitmer. “When combined with the Michigan Achievement Scholarships I just signed into law, students can save up to $15,000 as they pursue their college degree. I am grateful for this partnership that will move us closer to achieving our Sixty by 30 goal, and I will keep working across the aisle to lower costs and establish tuition-free paths to higher education and skills training with programs like Michigan Reconnect. Let’s keep moving Michigan forward.”

Representative Ben Frederick (R-Owosso):
“Henry Ford College and U-M Dearborn are demonstrating tremendous leadership and sending a clear message today that they will remove all barriers possible which cost learners time, money, and motivation in the pursuit of both two and four-year degrees. I’m confident this students-first approach and the success which is certain to follow will serve as inspiration for similar partnerships throughout Michigan.”

You can learn about the benefits and goals of the game-changing Learn4ward partnership here. A website facilitating student enrollment in Learn4ward is coming soon.

Photos from the launch event are below.

For more information about Learn4ward, contact HFC Communications: communications@hfcc.edu or 313-317-6800.

Related: Read the UM-Dearborn story about the launch of this program