HawkStrong: From writer’s block to aspiring lawyer and justice advocate 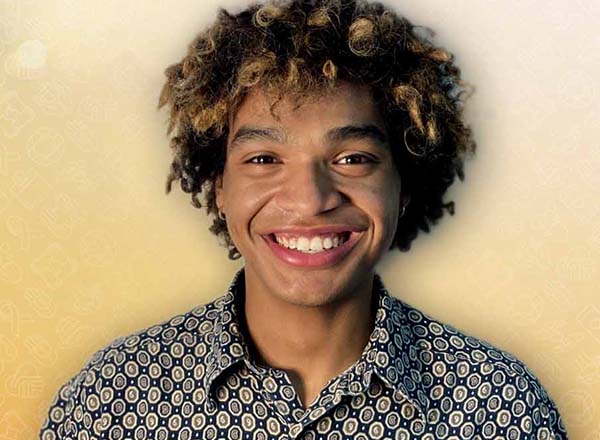 Before coming to HFC, Brad Gonzalez was so nervous about writing, he couldn’t even write an email without struggling. Now that he has graduated from HFC and Wayne State University, he writes reports and legal documents for clients at the Southwest Detroit Immigrant and Refugee Center every day.

“I was not a very good student when I graduated from Lincoln Park High School. I always felt inferior academically to my classmates, and that really put a damper on my grades. Looking back, I did not have the discipline or confidence to study as I needed to. I felt this would come with time – and I was right – so I had a choice to make: Go to a big university and pay the higher costs, or go to a good community college, live with my family, and work. For me, the decision was obvious,” explained Gonzalez, of Lincoln Park.

He chose Henry Ford College, and it changed his life.

A better student and lifelong learner, thanks to HFC

“For many reasons, these great people always looked out for me during my time at HFC. I think about them so much. I owe them my success,” he recalled. “Elaine Saneske would work tirelessly with me to prepare my core writing and math skills. She was so forgiving and patient with me. I was not so forgiving and patient with myself, which is something I have had to learn over time. HFC allowed me to become a better student and lifelong learner.”

“Brad was an exceptional student, engaged and eager to learn. He shined in my class and became involved in activities, including many of the Democracy Institute projects,” said Perry, who teaches political science.

Gonzalez recommended that his younger brother, Christian Perez, enroll at HFC. This fall, Christian is starting his freshman year at the College.

“My brother has so much capacity and potential, I feel he needs some time to develop as a student just like I did,” said Gonzalez. “He does not yet know what he wants to do, and a lower-cost, supportive school like HFC is perfect for him. I hope his experience is as great as mine was.”

Community-oriented mindset is in his blood

Transferring to Wayne State, Gonzalez recently earned his bachelor’s degree in business administration with a major in information systems. He is currently the IT manager for SWIRC. He is responsible for:

Gonzalez has now started graduate school at the University of Michigan School of Social Work in Ann Arbor. He is in a dual-enrollment program, and he will apply to U-M Law School next year. His plan is to complete his master’s degree in social work and juris doctor (law degree) in the next four years.

“I want to be like my boss and mentor Kevin Piecuch (who founded SWIRC), an attorney dedicated to helping his community. I grew up with a mother who worked at a non-profit for my entire life,” said Gonzalez. “That community-oriented mindset is in my blood. I have been surrounded by people who volunteer their time to help people all my life. I have volunteered at Gleaners Community Food Bank since I was 5. I want to continue my path of public service in the legal world.”

Asher, who teaches business management, is a big fan of her former student.

"It is always so rewarding to hear about the successes of our graduates!” said Asher. “While at HFC, although Mr. Gonzalez showed a great acumen for business, he kept saying that what he really wanted to do was go to law school. During spring break, he showed how much he cared for others by going to Puerto Rico to help rebuild his grandparents' house, which had been severely damaged by a hurricane. I am not surprised at all that he’s combining his dream of going to law school with pursuing an MSW. Way to go, Mr. Gonzalez!"

A sense of camaraderie with his peers

Gonzalez spoke about how HFC prepared him for Wayne State and beyond.

“HFC allowed me to be around other students in my situation. I met so many students, young and old, who felt as if a 4-year school was far too big of a commitment for them. HFC allowed them the ability to take classes with less financial risk and with people who don’t have as much access to wealth,” he explained. “I felt a sense of camaraderie with my peers because we didn’t come from a rich background. We were either the products of blue collar parents (like myself) or actually blue collar parents attempting to improve the quality of life for their family. Being around people like myself and learning in that environment provided me with confidence and unlocked my capacity to learn.”

Gonzalez continued: “The faculty at HFC were very understanding of my circumstances and allowed me to take risks academically. For example, I remember I wrote a literacy narrative about the times I would read rap lyrics as a kid, and how it was my first important rhetorical experience. While that may seem unorthodox and off topic, Prof. Nassrine Karaali (now the assistant principal of Bryant Middle School) allowed it and motivated me to elaborate. The reason I mention this is because at Wayne State, many classes I took were full of students who were more well off financially. Being in a classroom full of students who come from a wealthier lifestyle would have been hard for me before I came HFC.” HFC allowed him the time and opportunity to mature and gain confidence in himself and a better understanding of different life experiences.

Not just academics at HFC, but also life and growth

The diversity on the HFC campus allowed Gonzalez to get comfortable in a college environment.

“I love the student body, professors, and the campus itself,” he said. “The professors worked tirelessly with me to help me catch up to my peers. They also provided me with meaningful conversation and advice about my life and future goals. The campus is so bright and vibrant, while it may not be the biggest, it always had enough options for me to study and eat!”

Gonzalez continued: “HFC really built my academic confidence. I remember when President Russell Kavalhuna came to the College [in 2018]. It made such a difference to see the president walking around the campus asking students what they liked and disliked about their College.”

He has vivid memories of walking across the stage to get his diploma.

“I remember what it felt like to hold my first degree in my hands,” said Gonzalez. “It wasn't a moment of shock or glory. It was more a moment of realization – a ‘Yes, I can do this!’ type of feeling. All those fears of inadequacy were gone. From that moment onward, I was a college graduate!”

Henry Ford College proudly supports our students in their academic and life success. If you want to learn more, contact us! And if you have a great story about your HFC experience, reach out to communications@hfcc.edu.