Get to Know HFC: Sharon Pearl Picking has a passion for higher education and classic movies 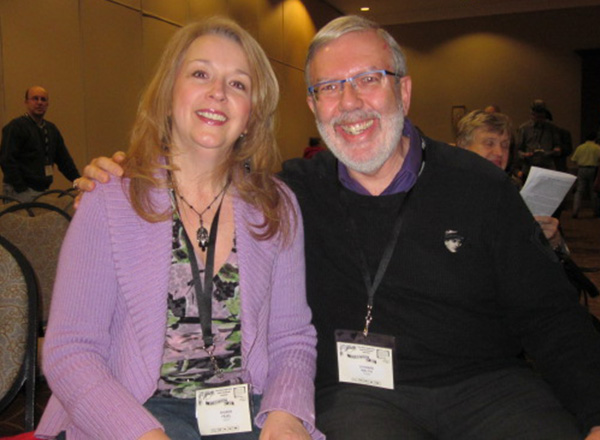 “I really enjoyed working with students and helping them in some small way achieve their dreams,” she said. “That is very inspiring to me.”

“My background is in finance and program and project management and oversight. I have also served as a member of the UM-Dearborn Alumni Society Board of Governors and still serve periodically on their Alumni Legacy Scholarship Committee. During my tenure, the board raised more than $1 million in funding for scholarships, which are awarded annually to needy students,” said Picking. “I previously served for more than 10 years as executive vice president and treasurer for Local 71 at HFC. This involved serving on the executive board, labor relations, negotiating contracts, and keeping the organization’s books.”

Picking also serves as the Project Manager for document imaging and workflow design, the document upload process, and electronic forms process and design.

“When I started at HFC, I was working with students. Now I have less contact with students. But I am still providing important support for them,” explained Picking. “Financial Aid is generally a leader on campus in employing new technologies. I am proud of the work I did with electronic forms as it became extremely important during the COVID pandemic. It helped us assist students in navigating processes electronically and laid the foundation for other areas to begin using document imaging and workflow, as well as the document upload process and electronic forms. I am proud of this work as it proved invaluable at a critical time.”

Foundation for a bachelor's degree

A native of Dearborn, Picking is the youngest of three and the only daughter. Picking and her two brothers are alumni of HFC (then called Henry Ford Community College). She earned her associate degree in general studies. Transferring to UM-Dearborn, she earned her bachelor’s degree in political science. She completed coursework in Schoolcraft College’s Non-Profit Leadership Program and in the Wayne State University School of Labor Relations.

“HFC was the most affordable option,” she recalled. “My time at HFC laid the foundation for me to complete an advanced degree at UM-Dearborn.”

Picking lives in Livonia with Patrick Picking, her husband of 10 years, who is also an HFC alumnus. They both attended Fordson but never saw each other again until their 30th high school reunion.

Both of them are active in the historic Redford Theatre in Detroit. Picking was the first female vice-president and the first female president of the Motor City Theatre Organ Society (MCTOS), which owns and operates the Redford, which shows classic movies on the big screen.

“My interest in classic films and history started at an early age,” said Picking. “My father loved taking my brothers and me to the movies and historical places. My father was also a stage actor at the Detroit Film Theatre and the old Cass Theatre in Detroit during the late 1940s. As a result, I have always felt more at home in an old house or building than I do in any modern place.”

A deep love for the Redford

Some of the actors and actresses the Redford have hosted over the last 12 years include:

On Dec. 17, 2011, Patrick got down on one knee onstage at the Redford during the intermission of its screening of It’s a Wonderful Life (one of Picking’s favorite films) and proposed to her. They were married in 2012.

“Thus, the Redford will always hold a very special place in my heart,” she said. “In fact, Dec. 17 is the anniversary of our engagement at the theatre and It’s a Wonderful Life was shown that day, as it was on that special day more than 11 years ago.”

In addition to her participation at the Redford, Picking has been a volunteer several times at Cinecon, a major classic film event each year in Los Angeles that attracts many from the film industry. She has participated numerous times in CinéFest, another classic film festival held annually in New York. Most recently, she participated in the Columbus Moving Picture Show in Columbus, OH.

“While the depth and breadth of my film knowledge is not as extensive as my husband’s, I have an above-average familiarity with film and the film industry,” said Picking. "My husband and I also travel the country visiting other historical theatres and places,” she said. “I am also very passionate about the City of Detroit and preserving its historical legacy for generations to come.”

Picking continued: “The next chapter in my life’s adventure is my husband and I just recently purchased his great-grandfather’s ancestral home in Claremorris, County Mayo, Ireland. It is called the Picking-Maguire-Conlon House. We are going to restore the home, vacation there, and eventually put it on VRBO as a rental. Clearly, my love of history, historical places, and film knows no boundaries.”