Notice: This article is more than one year old and is part of the Henry Ford College news archive. Information in the article may be outdated. For the most current news and information about Henry Ford College, please visit hfcc.edu/news, or contact communications@hfcc.edu.
Release Date:
Tuesday, January 12, 2021 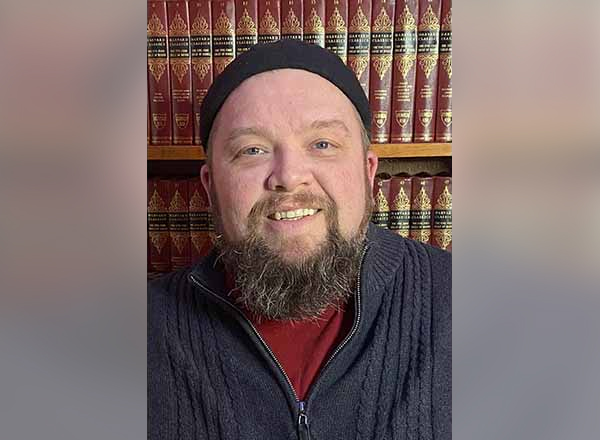 Dr. Adam R. Hazlett, a professor and chair of the humanities department at HFC, was recently named the director of the Henry Ford II Honors Program.

Hazlett – who has been at HFC since 2003, teaching English, humanities, religion, philosophy, and political theory – follows in the footsteps of the late Dr. Michael Daher, the Honors program’s previous director.

“His shoes – along with his predecessor Dr. Nabeel Abraham – are pretty big ones to fill. I hope to continue the well-respected legacy that both had built. I am honored to have been entrusted with Dr. Daher’s work in the program and with our Andrew W. Mellon Foundation grant and with our connections to the University of Michigan (U-M) in Ann Arbor. I hope I can live up to what they have built,” explained Hazlett, who lives in Fenton with his wife and daughter.

His duties as director include:

His immediate goal as director is continuing to build an Honors program that is the first choice for local students.

“I want to increase the number of participants through quality course offerings and research/mentorship opportunities,” said Hazlett. “Eventually, I would like to give the program a more permanent ‘home’ on campus that will give students in the program ownership and a sense of community.”

Born in Sugar Grove, OH, a small town in the Appalachian foothills, Hazlett was a 4-H student who worked on at a 4-H camp and a horse ranch. He loved reading escapist fantasy, devouring the works of J.R.R. Tolkien and the Dragonlance series of fantasy novels.

After graduating from Berne Union High School in Sugar Grove, OH, Hazlett attended Ohio University in Athens, OH. He earned his bachelor’s degree in political theory and writing in what was a self-designed interdisciplinary degree.

"It is a gift to see your students become successful"

“She was my freshman composition teacher,” recalled Hazlett. “It was her first semester teaching and my first semester as a college student. I was not a good student.” He added with a laugh, “I am surprised that she still talks to me.”

Schmitt laughed when she heard that. Not only does she still talk to him, she’s proud of his accomplishments.

“It is a gift to see your students become successful. This is particularly pronounced with Adam. Perhaps this is because we met at such instrumental junctures in our educational journeys - him as a freshman at OU, me teaching my first college class ever.

"Perhaps it is because I have the privilege of knowing the man he is today,” she said. “As a student, Adam’s intelligence was obvious; he loved to argue. His nuanced arguments about free-writing could fill a 50-minute class. As a freshman, he also loved Sugar Grove, which has influenced his love of Winesburg, Ohio, Appalachian culture, and overalls, which he occasionally wears to class. Also, as a student at OU, Adam loved philosophy and the world beyond Ohio, which led to him to volunteer in Africa and – many years later – earn a doctor of arts. As a colleague, I know Adam as a gifted teacher who has the ability to connect a student’s culture and community to the larger world of literature. This talent to engage and foster dialogues will make him an excellent advocate for HFC and an exceptional director of the honors program.”

Using the Marvel movies to teach ethics and morality

For his doctoral dissertation, Hazlett extensively referenced the films of the Marvel Cinematic Universe (MCU), which is based on the super-heroes appearing in Marvel Comics.

“I wrote about how ideology is presented in the films and how that ideology can be used in the classroom to teach morality and ethics,” he said.

In fact, Hazlett uses the super-hero film a lot in his classes. This includes the Avengers, Iron Man, and Captain America movies – which are all part of the MCU – and director Christopher Nolan’s Batman trilogy: Batman Begins, The Dark Knight, and The Dark Knight Rises.

“They are always a great doorway into the western hero ideal,” he said. “I can connect them with the works of (author) Joseph Campbell or (psychologist) Carl Jung to provide students a popular example of the theoretical concepts presented.”

Teaching about the joys that make us expressly human

Initially, Hazlett planned to teach at the secondary level. But he feels he is better-suited for teaching at the college level.

“I taught English in Africa in 1999. I was a K-12 education major at that time. When I returned to the United States, I found that my spark for teaching could not be met by standardized tests and curricular restrictions. I wanted to teach students about the joys of those things that make us expressly human. English literature was one of those subjects. To me, it didn’t matter what subject I taught, only that I taught. This is why I went on to get more degrees in different subjects… I have always seen the innate connection between seemingly disparate disciplines,” explained Hazlett.

For Hazlett, the best part and the most challenging part of working at HFC is the same: the students.

“I love my interactions and experiences that I have had with students. Often, I find that I learn as much from them as they do from me. I know that is clichéd, but it is also true,” he said. “It is hard for us in the faculty to always remember when we were in their shoes once. And now with a global pandemic, social media, and the like, it is even more difficult. I just am trying to provide 21st century young adults with the skills and curiosity that will help carry them through to a successful and contented life.”