Holi, the Hindu Festival of Colors 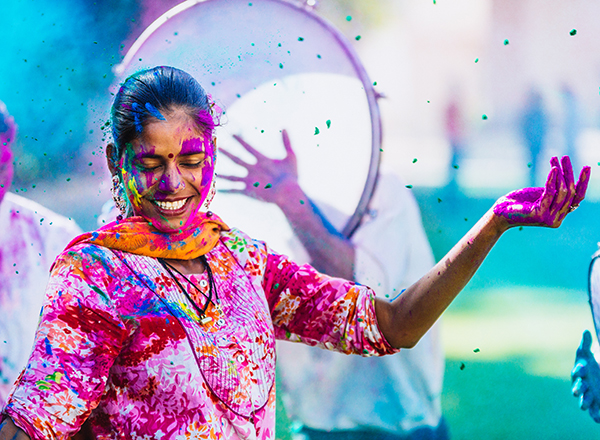 On Sunday, March 28 to Monday, March 29, many of the world’s Hindus, South Asians, and their communities will celebrate the festival of Holi.

Holi is a joyous and colorful holiday. It is one of the two most important festivals of the Hindu year (the other is Diwali).

The holiday dates back to the fourth century A.D. It commemorates the return of spring after a long winter and also symbolizes good triumphing over evil. The holiday falls on Purnima, the Sanskrit word for full moon, and occurs during the Hindu calendar month of Phalguna.

The origin story of the holiday varies, but all the stories are grounded in the ideas of love, goodness, and renewal. Some variants are based on the story of Hiranyakashipu, a king who believed he was immortal, and his son, Prahlad. Prahlad was a devoted worshipper of Lord Vishnu. Hiranyakashipu was offended that his own son would worship Vishnu instead of him. One story says Hiranyakashipu asked Prahlad’s aunt to burn him in a fire, but the boy was protected by Vishnu and remained unharmed. In another variant, Vishnu appeared in the form of a half-lion, half-man and killed Hiranyakashipu.

Another story centers on the deity Lord Krishna as a child. He is said to have used bright colors as a fun way to liven up the faces of his friend Radha and others.

The name of the holiday also has different origin stories. In one story, the name comes from a process in which gram (chickpea flour), wheat, and other grains are roasted. This mixture of grains is called “holuk,” leading to the name Holi. In a different story, Holi comes from the Hindi word “hola,” which means offering sacrifices or prayer to give thanks for the harvest.

The night before the festival opens is called “Chhoti Holi,” or “little Holi.” Bonfires are ignited in some communities to symbolize the burning of evil spirits. Community members participate by adding wood, twigs, and leaves to the flames while dancing or socializing around the fires. Some communities roast grains and corn to share and promote community connections.

In some communities, the streets, parks, and public spaces are transformed into a panorama of colors as people throw colored powder (gulal) or colored water (pani) into the air and cover themselves and others with the colors, often while dancing and singing to festive music. In some cases, water sprayers are used to add to the spread of colors, or water balloons are dropped from rooftops.

Some of the individual colors have specific meanings:

Families often gather for festive meals after the public celebrations. Sweets and desserts are shared with family and friends. Children receive new toys and gifts. This year’s celebrations will be affected by the pandemic, as it remains unsafe to gather in large numbers. But the spirit of joy and celebration remains.

To all who celebrate: Happy Holi!