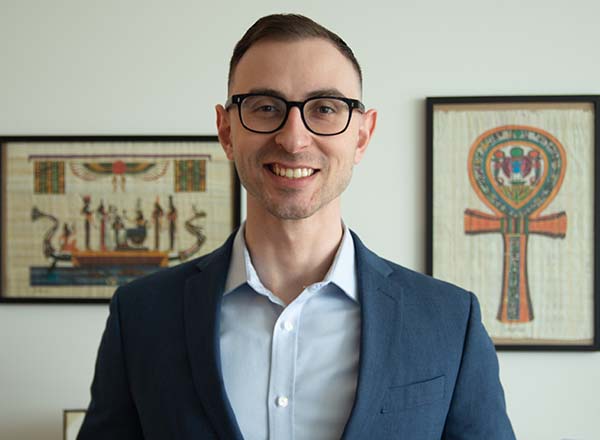 Back when he was a bushy-haired student at HFC, alumnus Amir El-Aswad dreamed of becoming a litigator. He’d imagine himself putting on a suit and tie in the morning, hustling to court from a tall downtown building, and emphatically waving his arms to get his point across to sway a jury.

“While that vision may not perfectly capture reality, I can finally say that those dreams came true. I recently began a new chapter in my life by joining a team of magnificent folks at an international law firm in my hometown of Detroit. I’m feeling immense gratitude for those who’ve supported me and encouraged me. I’m looking forward to what lies ahead,” said El-Aswad, of Detroit.

El-Aswad currently an associate attorney in the Detroit office of Foley & Lardner, LLP, which is an “Am Law 50” international law firm founded in 1842.

“At Foley & Lardner, I have the opportunity to craft creative arguments, solve dynamic problems, and witness the real-world impact of the work,” he said. “I will be assisting the firm's partners with their cases against corporations or in defense of clients.”

His duties also include:

His area of specialty in law is commercial/corporate litigation, primarily in federal court.

“This includes class actions, major breaches of contract, and other issues like trade secret misappropriation,” said El-Aswad. “It's important, intense, and stimulating work. Often, the cases involve ‘bet the company’ claims that threaten the existence of major corporations.”

Remaining grounded with every accomplishment

Born in Abu Dhabi in the United Arab Emirates, El-Aswad moved to the United States with his family when he was a child and settled in Bloomfield Hills. The youngest of two, El-Aswad graduated from what is now Bloomfield Hills High School. His mother Mary is a speech pathologist in the Dearborn Public Schools. She encouraged his older brother, Kareem, to attend HFC. He graduated in 2010.

“Kareem absolutely loved it there and encouraged me to enroll and join the Henry Ford II Honors Program,” said El-Aswad. “Plus, tuition was free because my mom worked in the Dearborn school district [the last P-12 district in the state of Michigan to be affiliated with a community college].”

“I have had the good fortune to teach many talented and remarkable students. Amir El-Aswad stands out for his good humor, sincerity, integrity, and ability to be both humble and ambitious. I have many fond memories of Amir when I taught him in Honors English, when he was the editor of the student newspaper, and when he presented his Honors-directed study at the LAND conference. He has always remained grounded with every accomplishment. I am always thrilled to catch up with him and learn about the next chapter in his life. I wish Amir much success with all his endeavors,” said English professor Dr. Peter Kim.

Once he graduated with honors from HFC with his associate degree in liberal arts in 2013, El-Aswad transferred to Cornell College in Mt. Vernon, IA. There, he obtained his bachelor’s degree in international relations in 2015. El-Aswad earned his juris doctor from the University of Chicago Law School in 2019. He completed some coursework at the Michigan State University College of Law.

El-Aswad spoke about his desire to go into law. Initially, he was torn between law and education, especially the latter because both his parents are educators (his father El-Sayed recently retired from the United Arab Emirates University, where he taught anthropology).

“I knew law was the right path for me after my independent study with Dr. Kim, during which I analyzed the rhetorical techniques used by the attorneys who argued Citizens United v. FEC, a groundbreaking Supreme Court decision that was recently issued at the time,” he said. “I found that the legal profession uniquely combined my interests in persuasive writing, critical thinking, and public speaking. I was hooked, so I transferred to Cornell in large part due to its robust and nationally-ranked mock trial program.”

Eventually, El-Aswad would like to become a partner at a major law firm or establish his own law practice. Prior to joining Foley & Lardner, El-Aswad spent two years as a law clerk for Judge David M. Lawson in the United States District Court for the Eastern District of Michigan.

“Law clerks are licensed attorneys who substantively support judges in rendering their decisions,” he explained. “The work involves intense amounts of legal research and writing, attending hearings and trials, and analyzing briefs, petitions, and motions filed with the court.”

“The perfect launching pad for my career”

For El-Aswad, the best part of attending HFC was its faculty, hands down.

“They are extremely invested in the success of their students and are beyond willing to mentor and encourage those who seek to better themselves. They believed in me before I began to believe in myself,” he said. “I cannot thank HFC enough for putting me on the path that I am on today. The small class sizes, supportive faculty, and ample opportunities to explore academic interests served as the perfect launching pad for my career. Attending HFC was one of the best decisions I've ever made. I am very confident that I would have felt much less motivated and empowered had I begun at a massive university.”

El-Aswad spoke about how HFC prepared him for the remainder of his undergraduate education and law school.

“I developed a significant amount of self-confidence as a result of my real-world experience with the newspaper and because my professors deeply cared about, encouraged, and believed in me,” he said. “Through my Honors English classes, I learned how to write concisely and persuasively. I also learned how to conduct practical research, distill the important information from a large amount of material, and discuss my findings in an academic setting through my Honors Great Works and colloquium courses. Those classes prepared me for the seminar-style education I received at Cornell and law school.”