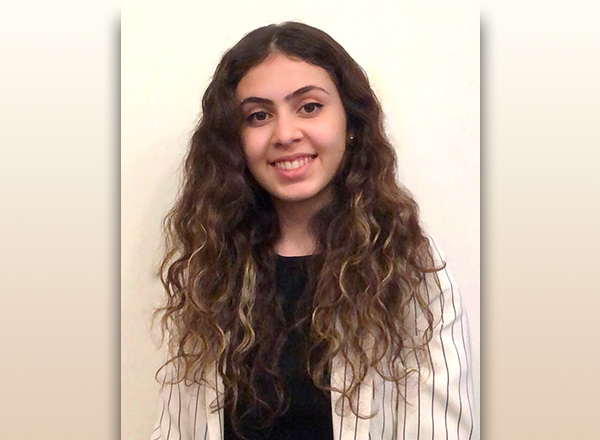 Yasmeen Berry is still in high school, but has already set a career goal to become a physician specializing in neurology. She is enrolled in Henry Ford Early College (HFEC), a combined high school and college program that has a reputation for giving students a jumpstart in the healthcare field.

“I chose to attend HFEC to get a head start on my college education and for the opportunities it provides to connect students to four-year educational institutions,” said Berry, of Dearborn, who will graduate in 2021, earning her associate degree in biology from HFEC. Her two younger siblings, Hassan and Ali, also attend HFEC.

In collaboration with the Truttmann Laboratory, in the Department of Molecular and Integrative Physiology of the University of Michigan Medical School, Berry gave a presentation called “Investigating Factors Influencing Variability of N2 C. elegans Lifespan”.

According to Berry, C. elegans is a non-parasitic, transparent roundworm that reaches about 1 millimeter in length and is commonly used in scientific research. Due to its genetic versatility and short lifespan, it has been utilized in recent years to test genetic targets, biological compounds, and experimental factors on aging and longevity.

“Due to the increased use of this model organism, hundreds of publications have described a multitude of compounds that have been shown to slow aging. However, the project team I was involved with observed that there was a problem concerning reproducibility of these seemingly promising experiments. We hypothesized that slight alterations in experimental setup and conditions are the cause of the observed Lifespan Variability Phenomenon. We hope that the outcome of this study can lead to the advancement of our knowledge of complex processes, including aging and neuro-degeneration,” explained Berry.

For Berry, the most challenging aspect of the fellowship process was being able to efficiently and effectively curate data from hundreds of scientific articles in the summer program’s short time-frame.

Despite being pressed for time, she still had a great experience.

“Through this symposium and UROP as a whole, I was able to meet individuals from a wide range of disciplines and to lay the foundation for long-lasting connections,” said Berry. “The best part of the fellowship process was getting the opportunity to learn a commonly used computer language for research data analysis known as R.”

A member of the Henry Ford II Honors Program, Berry is the president of the HFC chapter of Phi Theta Kappa; a freelance contributor to The Mirror News, HFC’s student-run newspaper; a student representative of The Mirror News Advisory Board; and a member of the National Society of Leadership and Success (NSLS).

“One of my favorite memories at HFC was when our Phi Theta Kappa chapter was able to organize an event in collaboration with other Phi Theta Kappa chapters in our region and the non-profit Fleece & Thank You earlier this year,” said Berry. “By the end of the event, we were able to make and donate 80 fleece blankets to children in Michigan hospitals. I am grateful that I had the opportunity to help organize and participate in the event.”

Upon graduation next year from the HFEC, Berry will attend U-M where she will double-major in neuroscience and biological anthropology. After she earns her bachelor's degree, she aspires to attend medical school.

“The HFEC has prepared me to adapt to new academic environments found in four-year educational institutions,” said Berry.

HFC professors helped prepare her for a rigorous research environment

“Dr. Daher was one of my greatest role models for success,” Berry fondly recalled. “It was his unwavering support that gave me the courage to apply to the Community College Summer Research Fellowship. I could have never thanked him enough for encouraging me to apply. I have the utmost appreciation for the mentorship he had provided. May he rest in peace.”

Berry says classes taught by Stepaniak, Traini, and Karapetian provided her with a strong foundation for understanding the challenging biological research concepts in the Community College Summer Research Fellowship.

“Earlier this year, I had the opportunity to conduct an honors directed study with Dr. Karapetian. The objective was to investigate the effects of protein denaturation on yeast cell enzymatic kinetics and extrapolate implications for human neurons and the development of Alzheimer’s Disease,” said Berry. “This directed study helped me develop a specialized knowledge base needed for understanding neurological literature. The instruction I received from the many talented and supportive professors at HFC paved the way for a smooth transition into a rigorous research environment.”