Notice: This article is more than one year old and is part of the Henry Ford College news archive. Information in the article may be outdated. For the most current news and information about Henry Ford College, please visit hfcc.edu/news, or contact communications@hfcc.edu.
Release Date:
Monday, March 16, 2015

HFC to Present “Hairspray” in April and May 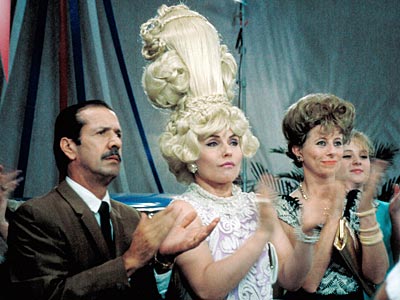 HFC will present the musical “Hairspray” – based on the 1988 John Waters film of the same name and the 1992 Broadway musical – beginning Friday, April 24, at 8 p.m. in the Adray Auditorium.

The public performances will be on the following dates:

There will be private matinees for high school drama classes at 10 a.m. on Monday, April 27; Wednesday, April 29; and Friday, May 1.

The play is directed by Mary Bremer-Beer. Kevin Dewey is the music director, Diane Mancinelli is the choreographer and Gerry Dzublinski is the technical director – all four of whom teach various Fine Arts classes at HFC.

Set in Baltimore during the turbulent 1960s, “Hairspray” chronicles the adventures of “pleasantly plump” Tracy Turnblad, who auditions for “The Corny Collins Show,” which is a popular teeny bopper dance show. She also leads the fight against racial segregation and seeks to racially integrate “The Corny Collins Show.”

“I love the music in ‘Hairspray.’ There’s also a cultural lesson that focuses on the Civil Rights Movement in the 1960s and racial discrimination. It’s about discrimination of any kind, really, such as Tracy’s weight problem. The fact that racial problems have come around again and is an issue today makes it topical,” said Bremer-Beer.

The role of Edna, Tracy’s plus-sized mother, has always been played by a man. In the 1988 version, the late Divine (whose real name was Harris Glenn Milstead) played Edna in what was his final role. In the 2007 version, Travolta played Edna.

“I believe having a man play the mother is comic relief to offset the seriousness of the racial problems prevalent throughout ‘Hairspray,’” said Bremer-Beer.

Tickets are $15 for general admission and $12 for senior citizens, students, and HFC faculty/staff with a valid photo ID. For further information about “Hairspray,” visit HFC Theatre Arts or call 313-845-6478.

Based on the New Line Cinema film written and directed by John Waters.
Produced through a special arrangement with Music Theatre International