Notice: This article is more than one year old and is part of the Henry Ford College news archive. Information in the article may be outdated. For the most current news and information about Henry Ford College, please visit hfcc.edu/news, or contact communications@hfcc.edu.
Release Date:
Tuesday, October 20, 2015

College to Present “A Christmas Story” 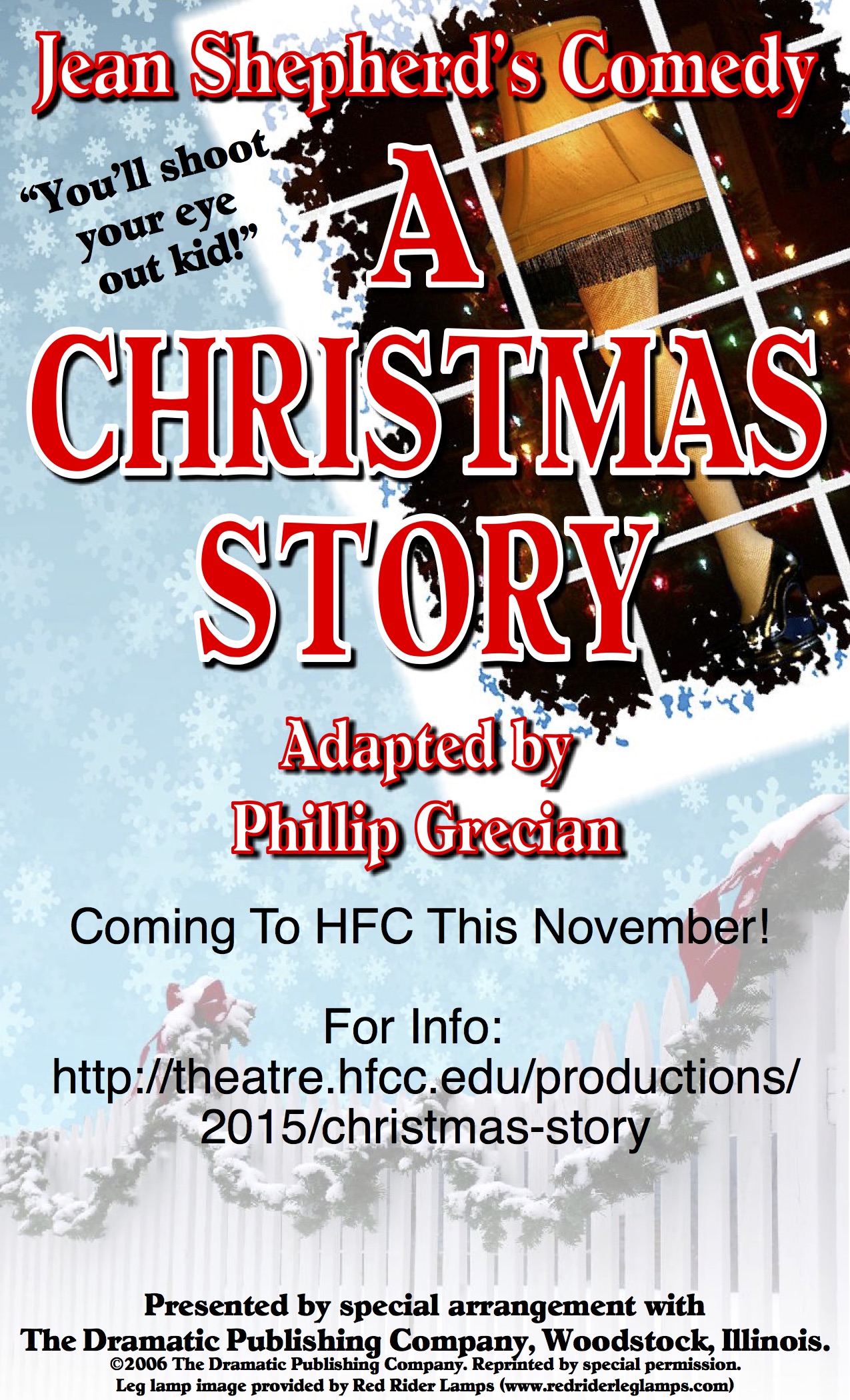 HFC's Theatre Arts department will present “A Christmas Story” in November and December.

Performances of “A Christmas Story” are on the following dates at HFC’s MacKenzie Fine Arts Center (Building F) on the main campus:

Based on the book “In God We Trust, All Others Pay Cash” by the late Jean Shepherd, “A Christmas Story” is a coming-of-age tale set circa the 1940s where 9-year-old Ralphie wants a Red Ryder BB gun for Christmas, much to the objections of his mother, his teacher, and even Santa Claus himself because they’re afraid he’ll “shoot his eye out.” To compound his problems, Ralphie and his friends are harassed mercilessly by neighborhood bully Scut Farkus and his toady Grover Dill.

A movie adaptation debuted in 1983 and did moderately well upon its initial release. However, it found a new life on home video and its popularity skyrocketed. Since 1997, TNT has aired the movie for 24 consecutive hours on Christmas Eve and ending on Christmas Day. Ratings have increased each year.

The audience can expect a performance that follows the 1983 movie quite closely with only a few minor differences. There are certain scenes that are deleted and others that are expanded to facilitate the requirements of live theater. The production stays true to the funniest scenes and themes for which “A Christmas Story” became so well known.

Tickets for “A Christmas Story” are $15 for adult and $10 for children, ages 10 and under. Tickets must be bought online. To buy tickets, visit http://theatre.hfcc.edu.

For questions or further information about auditioning for “A Christmas Story,” contact director Judith Fletcher at jlfletcher1@hfcc.edu.

HFC Theatre prides itself on offering a diverse selection of arts entertainment for the residents of Michigan. Not all productions may appeal to or be appropriate for every person or for all ages. Therefore, patrons are encouraged to familiarize themselves with the shows we offer in order to make informed decisions prior to purchasing tickets. This production is suitable for grades 6-12.

In the weeks leading up to Christmas, 1939, in the fictional northern Indiana town of Hohman, Ralphie Parker desperately wants a Red Ryder BB Gun and will do anything to make sure he gets it.

The audience can expect a performance that follows the movie quite closely, with only a few minor differences. There are certain scenes that are deleted and others that are expanded to facilitate the requirements of live theatre. The production stays true to the funniest scenes and themes for which A Christmas Story became so well known.

Humorist Jean Shepherd's memoir of growing up in the midwest in the 1940s follows 9-year-old Ralphie Parker in his quest to get a genuine Red Ryder BB gun under the tree for Christmas. Ralphie pleads his case before his mother, his teacher and even Santa Claus himself, at Higbee's Department Store. The consistent response: "You'll shoot your eye out!" All the elements from the beloved motion picture are here, including the family's temperamental exploding furnace; Scut Farkas, the school bully; the boys' experiment with a wet tongue on a cold lamppost; the Little Orphan Annie decoder pin; Ralphie's father winning a lamp shaped like a woman's leg in a net stocking; Ralphie's fantasy scenarios and more. A Christmas Story is destined to become a theatrical holiday perennial. Approximate running time: 2 hours.

Classics bloom quickly in modern times...you don't have to have grown up with 9-year-old Ralphie Parker and his ache for an air rifle under the tree to think of A Christmas Story as a Christmas must. And [this] version is just as kindly and just as cockeyed as A Christmas Story is meant to be." —Elizabeth Maupin, Orlando Sentinel

"I thoroughly fell in love with the show. This version is quite meaningful. It plays well." —Van Kaplan, Executive Producer, Pittsburgh Civic Light Opera.

"A Christmas Story is still...one of the more enchanting ways to be transported to a world beyond our own. Yet it also serves to remind us how lucky we are to live a culturally rich life...and Philip Grecian's thoughtful stage adaptation preserves the old...references." —Tony Brown, [Cleveland] Plain Dealer

Educational Value Shows kids in the late 1940's listening to the radio for entertainment. Kids can read up more on the "Little Orphan Annie " program and others.

Positive Messages Underneath some ironic and satirical humor, this is a warm story about a 1940's family. It's a refreshing look at a less-than-perfect holiday experience and the unexpected joy that can be found when things don't go as planned. Family and friendship are both valued.

Positive Role Models Ralphie engages in some questionable behavior, especially when it comes to lying in order to stay out of trouble. But he's a tame child by today's standards, and he does show determination and persistence. While Ralphie's dad seems like the disciplinarian, it's his mom who hands out the soap when he's caught swearing. Violence & Scariness It's mostly yelling and arm-twisting when a bully harasses the kids daily. One of the girls stands up to the bully and Ralphie loses his temper and punches the bully until he gets a bloody nose and runs home crying. A dream sequence shows Ralphie with his prized BB gun shooting at 3 comical bandits and chasing them away. Another dream sequence has Ralphie rescuing his friends from a field trip gone awry in the "jungles" of Indiana and shooting a snake out of a tree. A kid touches an icy metal pole with his tongue on a dare and it freezes to the pole.

Sexy Stuff Ralphie's dad wins a lamp shaped like a woman's leg. Ralphie runs his hand up and down the leg until his mom stops him.

Language Lots of discussion about the use of profanity by Ralphie's father who constantly swears while fixing the furnace and being chased by the neighbors' dogs but it is only ever heard as "nonsense" words, especially when Ralphie lets the "F" word slip in front of his dad, which is heard by the audience as "fudge". He's punished with a mouthful of soap. Also some insults are used by the kids like "idiot" and "dumb".

Consumerism Main character is obsessed with getting a Red Ryder BB gun for Christmas. Mentions of other brands, some still available (Ovaltine), others not (Open Road for Boys Magazine)

Drinking, Drugs, & Smoking None are exhibited.

Based on a film written by Jean Shepherd, Leigh Brown and Bob Clark Directed by Judith Fletcher